From the World of Children’s Books 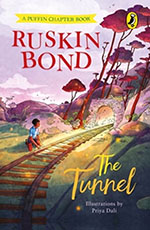 The Tunnel is a short chapter book about a young boy named Ranji who is fascinated by the midday train. He travels on his bicycle from the village to a low hill and patiently waits by the tunnel to catch a glimpse of the engine roaring out of it. After the train passes through the tunnel, the sound of the engine fades and the stillness of jungle returns. Ranji then decides to explore the other side of the tunnel. He walks towards the other end and finds a hut of a man named Kishan Singh, who is the tunnel watchman. His duty is to ensure that the tunnel is clear of any obstacles which could cause hindrance for the train as it passes through the tunnel. He informs Ranji that another train passes through the tunnel, called ‘The Night Mail’ and asks him to come and watch it at nightfall.

The next night, Ranji reaches Kishan’s hut to watch ‘The Night Mail’. As the time for the train to arrive approaches, Kishan goes for his routine check of the tunnel.

He notices that a leopard is wandering inside the tunnel. He returns to Ranji and tells him about the leopard. To save the life of the leopard from the approaching train, both decide to go inside the tunnel to drive the leopard out. As they go inside, the leopard starts to growl at them. Both begin to shout in the tunnel and as a result, their voices echo and the leopard flees. Minutes later, the train arrives. They watch it as it roars its way through the jungle and everything again falls silent.