Freedom of Expression And The Indian Constitution 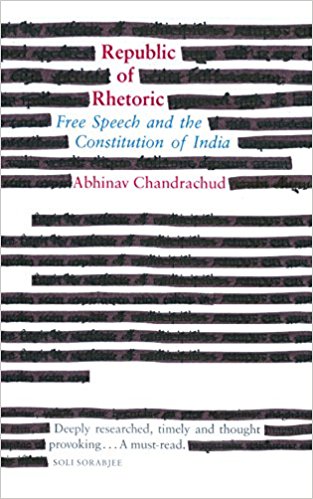 Freedom of Expression And The Indian Constitution
Vikram Raghavan and Prachi Tadsare
REPUBLIC OF RHETORIC: FREE SPEECH AND THE CONSTITUTION OF INDIA by Abhinav Chandrachud Penguin Books, 2018, 304 pp., 599
March 2018, volume 42, No 3

Purulia is a town in Bengal’s western periphery. Under British rule, it was the headquarters of the sprawling Manbhum district. At Independence, the entire district was allocated to Bihar. But its substantial Bengali population actively resisted what they perceived to be Hindi imposition. Demonstrations soon became a daily occur-rence as the State administration strove to contain the language agitation.

Amidst this surcharged atmosphere, the authorities in Manbhum seized a lengthy Bengali pamphlet calling for a violent and bloody revolution. The rambling pamphlet darkly hinted that those who brought Bengali ‘into disgrace’ would die. Although its author was not identified, its publication was traced to the Bharati Press in Purulia. Invoking the Press Act, the government ordered Shaila Bala Devi, Bharati Press’s ‘keeper’, to deposit 2000 rupees with Manbhum’s Deputy Commissioner ostensibly to deter such publications in the future.