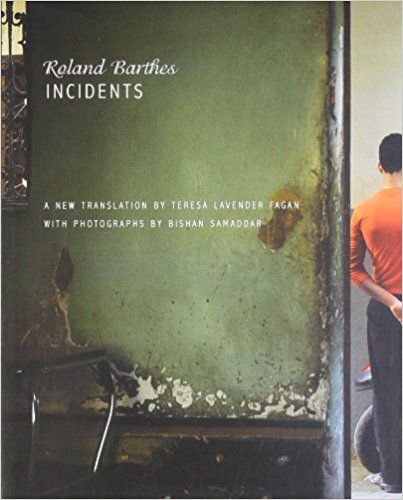 Walking back home from Francois Mitterands lunch party on 25 February 1980, Roland Barthes was evidently a tad preoccupied. The temptation is to imagine him in Proustian mode, reliving the sensations of the social event, savouring fully the elation and irritation it left behind, sorting and salting away impressions in his head. Or, perhaps the afternoons entertain-ment had been swiftly dismissed from a mind absorbed in other thoughts, equally Proustianheld by the beauty of a passing boy, lingering especially on the hands, or struggling with a fresh wave of misery for his already deeply- mourned motheror something altogether quotidian. But his eyes were not on the road and, at the intersection of the Rue Saint-Jacques and Rue des Ecoles, he was run over by a laundry van. The impact so disfigured him that although it had taken place at no distance from the College de France, he could not be recognized for hours later as he had carried no identity papers. Between the Mitterand lunch engagement and the College de France, Roland Barthes, then at the height of his eminence, met with the completely unexpected: oblivion.

Barthes missed the approach of that van in another sense, too.; He had failed to cull from his papers, to scorch the earth against would-be interlopers; nor left firm instructions regarding the disposal of his unpublished work. The riches that have so far come to light include some seven hundred works of art by his hand, paintings, line drawings and sketches, an eight-page draft towards a novel, the journal of mourning he had kept after his mothers death, and two pieces (journals again) of the four that make up Incidents. It is safe to say that they may not have appeared had he lived, or not in the form that they did.