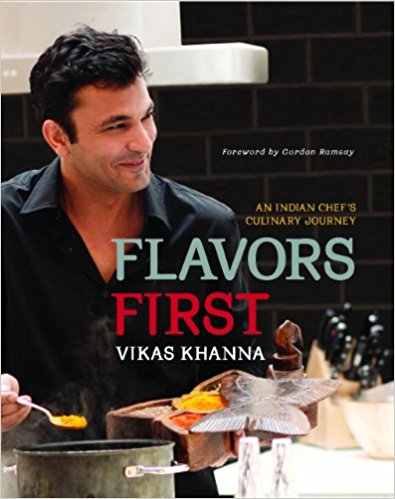 A good cookbook is more than just a collection of recipes. It tells stories about the writer and the ingredients. It transports you to kitchens and markets both familiar and unknown. Based on these criteria, Flavors First is surely a success. If you watch Master Chef or live in New York, chances are that you are already familiar with its author, Vikas Khanna. Vikas grew up in Amritsar, watching and learning to cook from his grandmother, Biji. At seventeen, he opened a catering business and then moved to New York after studying hotel management in India. He worked his way up through the New York restaurant scene and is now considered one of the most talented Indian chefs in America.

Flavors First compiles souvenirs from Vikas’s culinary journey. There is room in it for ghar jaisi dalas well as masala-honey Cornish hen with lavender. The book contains 138 recipes in all—93 of which are vegetarian—organized by broad food groups, such as poultry, legumes, and breads.

Standard American measures are used throughout the book, however a handy chart at the end provides the equivalent metric conversions for readers’ reference. A useful introductory section describes spices, herbs, and vegetables unfamiliar to the book’s non-Indian readers. Even if you are familiar with methi and amchoor, you might occasionally discover fascinating tid-bits of food culture and history. Did you know that murabba originated in Gujarat? Or that archaeologists have found nigella seeds (kalaunji) in the tomb of Tutankhamen?

Before testing recipes from a new cookbook, I spend weeks (sometimes months!) reading it as if it were any other book. I carry it with me on the subway, let it sit on the night-stand, admire a picture or two when in need of a break, and so on. It makes me feel like I am with the writer cooking in his or her kitchen—measuring the flour out, chopping the vegetables, or simply making a mess and dreading the pile of pots and pans in the sink. Recreating a recipe when all you have are written words requires immense patience. I often find this somewhat procrastination-like process of getting to know the recipes in a slow and steady manner extremely rewarding. I approached Flavors First in a similar manner and soon found the connection I was looking for.

Whether you are an Indian cook looking for more globalized versions of familiar recipes or someone making a first foray into the world of Indian spices and flavors, there is something in this book for everyone. Vikas experiments with unusual pairings like wine and garam masala (in mushroom-stuffed roast chicken), garam masala with honey and lavender (in murg masala shahad wala), adds asafetida in a regular mussels, garlic, butter and white wine sauce, and flavours dark chocolate with gulkand in good-old chocolate cookies (gulkand ke biskut). The more adventurous home-cooks will also appreciate the borscht-style chukandri gosht, ‘Chai-infused Emperor’s Green Rice’, and the ‘Forbidden Rice and Peas Pulao’ with short-grained black rice.

A number of beloved but basic recipes such as dhania chutney, khichdi, pooris, rajma, and Gujarati kadhi are unlikely to excite cooks who are already familiar with Indian food. Instead of relying on a book, beginner cooks will probably find it easier to solicit a family member who would as eagerly and lovingly teach them the proper technique of preparing yellow daal, as Vikas’s Biji did. Having said that, the book has primarily been written for American readers. These simple recipes are meant to convey the true flavours of Indian kitchens to the rest of the world. As someone who has on countless occasions been frustrated with Indian food being equated to saag paneer, mango lassi, and chicken tikka masala, it is refreshing to see tindora and karela make an unapologetic appearance. As the book says ‘these recipes go far beyond just mulligatawny’.

If I had to pick a least favourite dish, it would be the spinach and walnut salad with curry dressing. I would also prefer the spinach in aloo palak not to be over-cooked. The okra raita is an excellent dish, however I disagree with the suggestion that it can be stored in an airtight container for a week. Soggy okra is never a good idea, if you ask me. I would also recommend powdering half of the sesame seeds in khatte-meethe baingan to avoid giving the dish a little too much texture.

The seafood section contains my favourite non-vegetarian recipes. The deep-fried ‘lemon and fennel-crusted sole’ will make anyone who usually avoids seafood (i.e. me) go for generous second helpings. Almost every recipe here is light and highlights the freshness of the fish without overpowering it with spices. The addition of gujarati kadhi and rasam in the soup section makes up for the lacklustre simple pea and cream of tomato soups.

While some of the ingredients used in this book may not be easily available at the neighbourhood grocery store, there is plenty of inspiration in Flavors First to make it worth your while. Vikas’s appreciation and love of traditional Indian food and cooking methods is matched by his desire to fuse new flavour combinations and give old recipes a global twist. He complains that Indian cooking is not very open to change. If his ‘French breakfast radishes with mustard seed dressing’ are a true reflection of what fusion Indian food might look like in future, I am happy to jump off the traditional-bandwagon and join the new wave of chefs like Manish Mehrotra and Vikas Khanna.

A running theme throughout Flavors First is how food connects us with each other. As someone who grew up and lived in India for more than twenty years and then moved to the United States, I can relate to the things that Vikas misses about food in India. The shared memories of afternoon naps on hot Sundays after a rajma chawal lunch, gurudwara langars, and the handful of green chilies and coriander stalks from your friendly sabziwala make you connect with his recipes in more ways than are immediate. As the business of food becomes increasingly more commercial and impersonal, it is important to appreciate and acknowledge that food is ultimately about the people we cook for and eat with, and the experiences and memories we acquire through those interactions. From his disastrous attempt at preparing the family evening meal in his teens, Vikas’s culinary expertise has surely come a long way. If nothing else, in Flavors First he allows the readers a generous peek into his Biji’s kitchen and his travels thereafter.