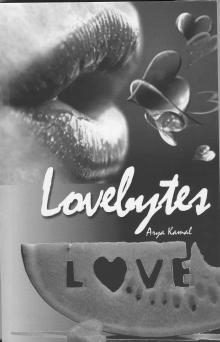 A slim volume, you pick up the book imagining that it is contains short chicken-soup-ish love stories. It is however, an unfortunate compilation of unanchored thoughts.It begins with a chapter on the definition of love, many of them mere clich’s like, ‘love is not a question but an answer to many questions.’ The chapter goes on to quote other poems and prose, without any credits given to the original writers and after the 4th paragraph or so, you’re tempted to zone out and pay no heed to the droning.The next chapter deals with other aspects of love and talks about sex not being part of it. Here too, the piece seems to flit from topic to topic, mouthing platitudes about two people in love not looking at each other but in the same direction.The third chapter is misleadingly titled ‘Facts’ while it contains everything but facts.

It seems as though the author has collected all the love related email forwards she could and compiled them to write a book. The chapter ends in the corniest way possible, giving you so-called ‘Time-tested Facts’ like – ‘Ask him to stand on your toes and tell him it is so that you can be as close as possible’, and ‘hug him from behind’, ‘tilt her chin up and kiss her’ and so on. One fails to see how these are facts; at best they are little tips on physical affection that anyone would know.

The only chapter that could hold some interest is the one that tells the tales of famous lovers such as Romeo and Juliet and Mark Anthony and Cleopatra. Unfortunately, the author deals with each one in a hasty manner, dwelling on facts when he should rightly have expanded on these stories if he really wanted to illustrate and paint true love instead of leaving it propped up on vague platitudes. The target audience for this book is hard to imagine. One might think it is aimed at teenagers, in which case is it meant to beadvice/instructional or inspirational? It seems to be aiming at somehow encompassing both and succeeding at neither. The content is something we’ve all encountered on email and hit delete after the first few lines. Something you cannot do when it confronts you in a hard copy form.

Lovesick teenagers need something more concrete if you’re talking to them about love and particularly in this day and age when it is possible to search for love poetry on the internet, it seems such a waste to have them all fitted into this book instead of sensible advice from an adult.

There seems to be no real criterion on which the chapters have been divided and as you read page after page you realise that they are mostly saying the same thing, which is pretty much nothing. The language is pedestrian and stilted and there are glaring grammatical errors too. There is neither the heart touching warmth you expect from love stories, nor the fluidity of language that would tempt you to read more.

All in all, it is not a book I would recommend and am bitterly disappointed by the realization that it aims to fill a teenager’s head with such fluff.