Feminism for the Diaspora 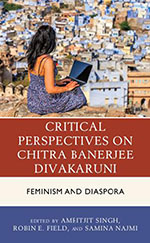 Like the Draupadi and Sita that she created in her memorable novels, Chitra Banerjee Divakaruni emerges in this book as a strong and questioning woman who turns received knowledge on its head. A compendium of academic essays on her works captures the genres of novel, short story and poetry while the interviews with Divakaruni along with her autobiographical note give this book an admirable range. A thoughtful and incisive introduction by the editors Amritjit Singh and Robin Field is systematically arranged and deeply textured. Divakaruni has surely travelled a long way from her middle class, traditional home in Calcutta to her global status today among the most influential of South Asian American writers. What I’ve enjoyed most about this anthology is the focus on feminism and diaspora, both of which are shifting signifiers. Bringing them together is like aiming at a moving target. However, the editors have aimed well and scored an ace. To quote from the Introduction, ‘Divakaruni’s work plumbs the nuances of intersectional feminism, demanding a holistic understanding of how South Asian/American women assert their autonomy and agency.’

The Indian diaspora in America is a fragmented community with a layering of consciousness and values that Divakaruni records in meticulous detail. For example, it is fascinating to note the interpretations of the strident female icon, ‘The Statue of Liberty’ as traced in an essay by Sau-ling Cynthia Wong emphasizing the irony of ‘America’s racialised immigration and naturalisation policies’. This, in relation to Indian Americans being known as an ‘ideal minority’, creates a tension in the fabric of the social segment in Divakaruni’s work. When Arranged Marriage, Chitra’s first novel was published, the backlash from diaspora readers criticized her for ‘exposing’ the Indian community in a ‘negative’ light. When later novels chose to speak of abortion and domestic violence, the backlash was repeated. Yet Divakaruni had based her plots on the truth telling of diaspora Indian women she had heard at Maitri, an organization founded by her in 1991.

Essays in the first section of the anthology titled ‘Feminist Politics, Feminine Sensibilities’, take up such internal schism that builds into a fragile mask of assimilation in what was considered the American mainstream. Nalini Iyer’s opening essay ‘Between Home and the World’, taking its title from Rabindranath Tagore, astutely tracks the tentative steps of early feminism emblematized in Tilo’s store and Rakhi’s cafe, ethnic spaces for South Asian American women in search of sisterhood.