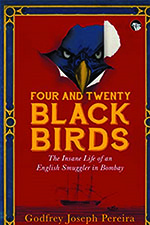 After Bloodline Bandra (2014), Godfrey Joseph Pereira returns to Bombay in this provocatively titled historical fiction, to document the story of Charlie Strongbow, Cross Island and the erstwhile ‘urbs prima in Indis’, Bombay, in the 1940s and 1950s. The brick red, orange and blue cover with the silhouette of a boat, and a bird aggressively pushing through a torn page, arouses curiosity and promises a story that is full of surprises. The book does not disappoint. The story is divided into three parts, the first set on the mainland of Bombay, the second negotiates between the mainland and Cross Island, four hundred metres away in nautical terms, but a different world altogether, and the final in Southall, England. The chapters are carefully titled to hint not only at the mood and tenor of the events that transpire, but also at the writer’s weltanschauung that is subtle but revelatory.

Pereira tells us in the Author’s note, which prefaces the main text, that the gift of a large cardboard bag full of letters—‘a horrorscope of hallucinatory mutilations’ (p. x)—is what sufficiently piqued his interest to document this ‘glorious, insane, tragic story’ (p. x) that was more than half a century old but needed to be told and shared. As he tells us, he hears a ‘dark whisper from the island’s past.’ And had all but ‘forgotten about the island’ until he ‘met Danny Strongbow in New York City, and the voice and life of the “big bearded” Englishman came alive from a forgotten pauper’s grave in Southall, England, and travelled across dark waters, back to Cross Island’ (p. xi).

What he sets out to do is craft a narrative that has enough actual people (Jinnah, Kanji Dwarkadas, Nehru, BG Kher, JS Bharucha), real events (India’s Independence, the Partition, Prohibition, the Jeep Scandal, Air India’s first international flight) and places (Ferry Wharf, Cross Island, Victoria Docks) to persuade you to suspend your disbelief and travel with Charlie on the chequerboard of life, as he climbs ladders in hope and in the next moment, is swallowed by snakes of despair and self-doubt. This is not a single story but a complex tapestry of history and politics; corruption and greed; race and religion; love and loss; fantasy and reality; and the primal and eternal quest for belonging.