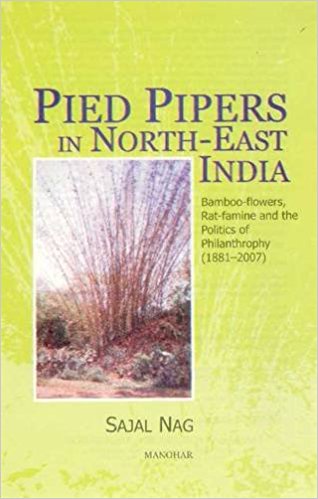 A strong connection between famine and ethnic politics has been brought out by a number of scholars in the context of North East India. The economic backwardness of the region has been widely discussed in the light of contemporary ethnic political process. Yet, the origin of widespread insurgencies in the North East region whether in the case of Mizoram, Manipur or Nagaland is an outcome of food shortage during the colonial and postcolonial period. However, the impact of famine on the people is generally left out in such discourses. Sajal Nag’s is a serious study on the history and politics around the bamboo famine in the context of Mizoram from the 1880s to the 1960s. Among India’s North East states, Mizoram occupies a unique position mainly due to the periodic bamboo flowerings which lead to devastating famines in the region. This eventually led to the Famine Relief Front turning into the political party called ‘Mizo National Front and its uprising against the Indian nation in the mid 1960s.

‘Mizo history from the precolonial migration to the encounter with colonialism, the interaction with the European Christian Missionaries and the growth of ethnonationalism in the post-Independent period were all strongly determin-ed by the cyclical bamboo famine. The various famine relief efforts which were made during colonialism by the state were all part of the colonial agenda of trying to win over the hearts of the tribal people. In contrast to the colonial policy, the post-colonial state ignored the fam-ine in the hills. As a consequence, the socio-political upheaval started in 1966 lasted for 20 years. Hence, history provides the lesson that government interventions become important elements in coping with the stress of famine.