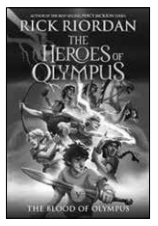 Ten years ago, the famous children’s author Rick Riordan, of Percy Jackson fame, published The Lost Hero, the first book in his The Heroes of Olympus series. It was an instant hit. It caused a whole lot of young readers like me to fall in love with Greek and Roman mythology. After The Lost Hero, Riordan wrote four more books in the series, and they are an entertaining account of the various Greek and Roman gods and their children. For Indian readers, it’s interesting to compare these western gods with our own gods and our myths and folklores.

The Lost Hero is a story about a Roman demigod called Jason Grace, who is son of Jupiter, god of the sky. Jason has no memory of the past. He, along with Piper Mclean, daughter of Aphrodite, the Greek goddess of Love, and Leo Valdez, son of Hephaestus, Greek god of forgery and flames, go on a quest to save Hera, the Queen of Heavens. Are you confused? Do not be. The author narrates the story in an easy, understandable manner. On their journey to rescue Hera, Jason, Piper and Leo encounter monsters and magic. The book is both serious and hilarious. Riordan uses third person narrative, switching the voices between the three main characters, to make mythology interesting and thrilling. One of my favourite lines is : ‘Can we just call them storm spirits?’ Leo asked. ‘Venti makes them sound like evil espresso drinks.’