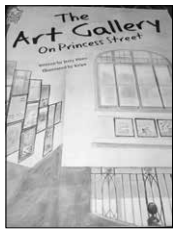 The Art Gallery on Princess Street is a historical biography of the world famous art Gallery of Modern art–Bombay’s Gallery Chemould. Earlier art was confined to traditional depiction of people, buildings and animals. The most famous genre of art was Mughal paintings or miniature painting.

The story goes back to Bapsy Sabavala, a woman of great wealth and eccentricity. Bapsy, initially a social worker but later turned into an actor, was the youngest daughter of Sir Cowasji Jahangir and Dhanbai.

She was artistic by nature and brought craftsmen from all over the country to decorate her home and called it a ‘symphony in stone’. The great loves of Bapsy’s life were her animal friends. Once she threw a ball for animals in the Taj Mahal Hotel, where she invited all the animals for high tea. She was a kind hearted person who raised money for the victims of Jallianwala Massacre and set up a store to help young men get work.

Bapsy had two sons, Shahrukh and Jahangir. Jahangir was a painter who went to Paris and England to study Art. There he married Shirin Dastur.

At a tea dance Bapsy managed to pair off Khorsed and a young girl, who had just finished school, and Kekoo Gandhy. Eventually the two of them got married. One day Kekoo met Roger Van Damne, who was very impressed by the fact that everyone in India had pictures of Gods and Godesses and proposed to Kekoo that together they must start a framing business. Kekoo’s father had some land in Andheri. This was Shahpur Baug where both of them set up the Chemould Factory and started a shop at Princess street to sell the frames.