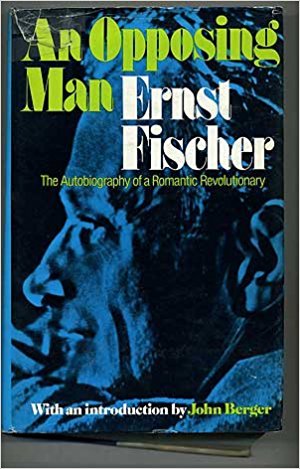 Ernst Fischer is best known to English-speaking readers for his brilliant study in Marxist aesthetics­ The Necessity of Art. This book, an autobiography covering the first forty-five years of his life, is con­cerned mainly with his political activities. But the book is much more than an autobiography. It is an absorbing and often lyrical description of the ethos of European Socialism in the period between the two world wars, a period when it had to fight fiercely for survival.

The first part of the book is best described as an attempt to explicate the genesis of a revolutionary personality. Fischer was born into the Austrian military class. His father, a not very successful in­fantry officer, was a stern martinet who tried to bully his family into obeying unquestioningly God, the Emperor and himself. But Fischer’s mother, who had married against her will, was more rebelli­ous, so that the father was thwarted and young Fis­cher grew up with a loathing for ‘the Establishment … the philistine meanness, the fustiness of the mar­riage bed, the nightmare pressure of hierarchy, com­mand and obedience, authority and subjection.’ Fischer places this in a wider context and sees, in the breakdown of the familial authority, the origins of the urge for equality and freedom that trans­formed a large part of the European intelligentsia into a radical force.

Towards the end of the First World War Fischer joined the Austrian army in Italy and participated in its very disorderly retreat during which he learnt what solidarity could mean. Later in Austria, ruin­ed by inflation, he lived in declasse poverty and had his first experience of hard labour. All this plus some uninhibited romances and an association with bohemianism completed the transformation of an imperial officer’s son into an Austro-Marxist Social Democrat.

One feature in this transformation is particularly interesting—the rejection of ritual and the avowal of romance which, with Fischer, goes even further when he juxtaposes Eros and Revolution. With this, the difference between an authoritarian and a revo­lutionary personality becomes complete—hierarchy, obedience and ritual on the one hand and, equality, freedom and romance on the other. Perhaps one should add to this the contrast between mystification and reason, between caste and class. But there is another much more important contrast. A revolu­tionary personality, unlike an authoritarian, is nece­ssarily the result of a fault in the interaction bet­ween society and personality. Every society, be­cause of the specificity of its modes of upbringing and education, determines the personality of its members who, in turn, by their acts, determine the nature of that society. In a stable or stagnant soci­ety this dialectical interaction is such that there is no disharmony between the two terms and hence no impulse towards revolutionary change. Wherever such an impulse exists, wherever revolutionary per­sonalities emerge, there must be some disharmony, some gap between the type of man required to sus­tain the mores of that society and the type that em­erges from its processes of socialization. . Every re­volutionary personality is at war with his society and seeks to impose on it his own need for freedom, eq­uality, romance, reason or solidarity so that, as Fis­cher puts it, there can be a union ‘between the wanderer and his shadow, the self and its project­ion into the world’—a union that is rarely achieved and when achieved is, alas, too brief.

Fischer began his political career as an orator and a publicist. In 1927, he left the small town of Graz where he had lived since birth and went to Vienna to work in Arbeiter-Zeitung, the official newspaper of the Social Democratic party. With this he was at the centre of Austrian politics and the second part of the book narrates the tragedy of Austrian socialism in the inter-war period, a tra­gedy that was repeated in many other parts of Central Europe. Austria, after the First World War was a severely truncated remnant of the old Austro­Hungarian Empire. However its capital Vienna was at that time the intellectual and cultural centre of Europe with its ‘schools’ of positivism, psycho­analysis, music and architecture. Austrian politics were dominated by one of the best organized Social Democratic parties in Europe and an assortment of rightist parties. Unfortunately, the Social Democr­ats despite their electoral successes were always de­nied their just share in government, except in ‘red Vienna’ which they transformed into one of the most progressive cities in the world. The world de­pression, growing pressure from the financial powers of the West, rising unemployment and the growth of fascism led to a sharpening of the conflict bet­ween the forces of the right and the working classes. But the leaders of the Social Democratic Party, out of an excess of caution and possibly even a fear of communism, failed their followers and let them down whenever a confrontation took place. In 1934 the workers provoked by fascists took to arms but in vain. Betrayed by their leaders, their upris­ing was ruthlessly suppressed. Fischer who had been drifting to the Left throughout this period fled the country, resigned from the Social Democratic Party and joined the Communist Party of Austria. The subsequent history of Austria was the familiar one of the rise of fascism, pan-Germanism and ulti­mate incorporation in the Nazi Reich. This failure of social democracy in the interwar period is a cru­cial element in the history of European and even international socialism.

The third and last part of Fischer’s book deals with his stay in Moscow from 1934 to 1945, when he worked in the Comintern and towards the end as a radio broadcaster. During this period the Comintern was dominated by Dimitrov and his concept of a Popular Front, a concept that was accepted too late to save the situation in Central Europe. This also was the period when the distinction between the interests of international Communism and those of the Soviet State became blurred since, at that time, it was truely difficult to see how socialism could be attained anywhere in the world if it was allowed to be defeated in Russia. Fischer worked with Togli­atti, Ulbricht and Communists from other countries and the inherent tension between the ideology of nationalism and of Communism comes across very clearly, particularly in the story of the German Communist who, on 14 June 1940 burst into Fischer’s hotel room and shouted: ‘We’ve taken Paris!’

Fischer deals very honestly with the trials of Zinoviev, Kamenev, Radek and others who were accused of conspiracy against the Soviet Union. Today we know that the confessions on which they were convicted were extracted by blackmail, false promises, appeals to party loyalty, threats against innocent family members, and much more, all ad­ministered by zealous and fearful civil servants. Fischer does not deny this and admits also that at that time he, like many others, thought the confes­sions were genuine. He refuses to take refuge in excuses of ignorance or pressure and accepts his cul­pability in these crimes which played so critical a role in the subsequent evolution of the socialist state. But Fischer also goes on to sh6w how this very state could, during the Second World War, draw from its people intense loyalty and great sacri­fices to save, not just itself, but the world from fascism.

Fischer’s book stops at 1945 when he returned to Vienna. For a few months he was Minister of Education in the Austrian Government and later a parliamentarian and a journalist. From 1959 till his death in 1972 he devoted himself mostly to his liter­ary activities. His disenchantment with Commu­nism grew—in his book he lists as contributory causes the Slansky trials in Czechoslovakia, the re­velations at the Twentieth Congress of the CPSU and, most important, the events of 1968 in Czecho­slovakia. Fischer became a social democrat out of a passion for freedom and a Communist out of a disenchantment with social democracy. Always, as a Communist, he was aware of the conflict between party discipline and his own romantic sense of individuality. It was therefore inevitable that at some stage he would break from the party. In this also he was like many others of his generation but un­like some of the others, Fischer did not lose faith in the vision of socialist freedom that moved him as a youngster in Graz. ‘Limestone may swallow up rivers; but the rivers are still there, under the ground, and come gushing forth again mightier than before.’

Fischer was a poet and playwright before he be­came a politician and it is to art that he returned at the end of his life. This book is no routine autobio­graphy but the work of a careful stylist, occasionally mannered but always elegant. There is no false nostalgia, no apologies for past mistakes, no boast­ing about old successes but merely a desire to understand, a deep urge to look ahead into the future. ‘The past is fossilized; it stares at us with the stony face of necessity. Freedom is the future.’ The publisher’s blurb hopes that the book will be seen as one of the key accounts of the twentieth century experience. It should be, for it will be di­fficult to find another witness as honest and graceful as Fischer.

Nitin Desai is Consultant in the Planning Commission, New Delhi.