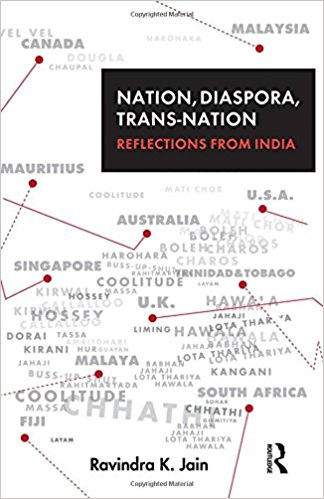 India has completed nearly two ‘successful’ decades of economic liberalization aimed at unrestricted movement of goods, services and investments across economies. The country is fast globalizing, which is slowly filling the gap between the rich and poor nations. A large number of economic opportunities are emerging within India. Despite this, there is an outbound movement of Indians to work and settle abroad. The trend is not new and it dates back to the third century AD. However, the Indian labour movement, also referred to as the modern Indian diaspora, started in the early nineteenth century. The book under review gives a background and evolution of modern Indian diaspora. It compares the different Indian ethnographic groups settled in different locations across the globe over a long period of time and tries to bind the diasporic issues with the policies in India as also studies the cultural spill overs in the country.

The author refers to diaspora as the situation of people living outside their traditional homeland. Over the years, there has been a change in the pattern of the diasporic movement from developing regions like the Latin American islands to more developed regions in the Pacific region. While the purpose of the out movement has largely been wealth related, there has however been a gradual change in the composition of diasporics. To cover the variations, the book spans major geographical zones including Africa and Mauritius, West and Southeast Asia, the Pacific, the Caribbean, North America and Europe using both primary and secondary research inputs. The major ethnic groups include Telugus, Malayalis, Sikhs, Biharis, Bengalis and Oriyas, among others, from the early nineteenth century till date. The author has adopted a comparative approach throughout the book both of cultures as well as inter-societal comparison.

The study gives an interesting contrast of the old and the new diaspora. While the old diaspora comprised 19th century labour migration primarily for some job, the new diaspora consists of movement of educated professionals for better opportunities. Consequently, the author has compared the ethnic groups over the different periods of time on different parameters. The issues that were of prime importance in the earlier periods were status of women in the host countries which subsequently matured to the status of Indian communities and how the religiously rich communities preserved their culture and values in a foreign land. For instance, a study has been done for the Sikh community residing in South-East Asia where the author has examined how religion has been preserved despite the group being a minority. The comparative study of different ethnic groups and different regions make the content rich in terms of its coverage.

The author then goes on to study the attitude of the returnees to India citing the example of Mahatma Gandhi who had returned from South Africa, a habitat of a large number of outbound Indians since the 19th century. The author has made very interesting observations about the condition of Indian migrants to Australia. The very recent racist attacks and ill-treatment of Indian students and anti-Asian movements in the Pacific region has been partly explained by the multiculturism in Australia. The author points out that multi-culture nations are generally at the risk of falling apart and in such a situation the brunt is felt by the minority communities—in this case, it is the Asian community in Australia.

In the later chapters of the book, the author has tried to structure a connection with the home country of the diasporic. This has been done for the individuals as well as the nation as a whole. The author has evaluated the impact of diaspora on the home country of the individual which has been done using a qualitative analysis and examination of the experiences of scholars living in the country in question.

As the book progresses into the 21st century, the author has presented some of the features of modern diaspora namely—permanent migration, migration of skilled individuals mostly from the upper strata of the society and migration of English speaking population—a trend which is very different from the old diaspora. This is probably the reason losing people to other nations has become more perilous for the country. It has been pointed out that the human and social cost of migration have been high for India. It is particularly true now when opportunities are emerging in the Indian economy itself and the country needs skilled people to leverage further growth. Since liberalization, the growth of the economy is primarily fuelled by the services sector—a sector that largely runs on human capital. The stage at which the Indian economy now stands, retention of human resource is of prime importance for the country. The social cost of diaspora was more pronounced during the early years with high discrimination against Indians in foreign lands. The trend seems to rise again with the recent events of racism.

The author has reiterated the growing importance of the people of Indian origin for the nation even when they are not residing in the country. This implicitly asserts the growing prosperity in the country and the ability to provide a shield for its people. This is one of the most interesting sections of the book as it deals with contemporary matters and it highlights certain policy issues. The author has listed some of the steps adopted by the Indian government since 2004 for the amelioration of Indians living abroad. These have included benefits like dual citizenship, provisions of investments abroad, compulsory insurance schemes and reservations in educational institutes for the children of people living abroad for livelihood.

The author has also raised certain concerns that may encumber future research. The paramount of these is the lack of proper data collection mechanism. Missing data raises questions on the authenticity of information and research on the one hand while restricting a researcher from getting a better grasp of the situation on the other.

The interesting macro conclusions in the book are applicable not only to sociologists but in all areas of humanities. The author has rightly pointed out the concerns relating to castes and tribes in the Indian economy. Diaspora has a lot of positive spill overs both in terms of money, knowledge and the application of the two in the home country. However, to use all these most advantageously, there has to be an open outlook.

Nation, Diaspora, Trans-nation: Reflections from India is a theoretically rich and empirically sound volume. It gives a wide understanding of diasporic issues and should be recommended as a text-book for students of anthropology. With the changing economic environment in India and growing opportunities for self-employment and employment in the services sector within the Indian economy, it will be interesting to examine the reversing trend. Of late, a large number of people are trying to relocate in India, which is particularly true post the global crisis. Hence, a good future course of research could be a detailed study of the returnees and how they contribute to the societal and human capital (skill) development within the economy.