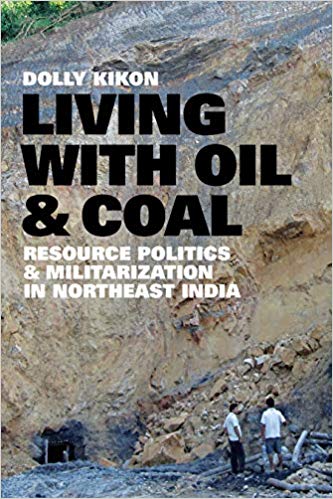 In Living with Oil and Coal, Dolly Kikon presents the ethnography of the entangled lives of multiple actors—of villagers, state officials, geologists, insurgents, traders and landowners—in the militarized carbon landscape of the foothills of Assam and Nagaland in North East India. Although the extractive economy of carbon—oil, coal (and tea)—in these places and beyond is often presented as techno-developmental interventions by geologists and Indian state officials to secure development and serve the national interest, Kikon convincingly shows the unmistakable and myriad ways in which the carbon landscape is produced as a ‘space of extraction… and how social components and relationships come together in complex and distinctive ways’ (p. 8). Drawing from Henri Lefebvre, the French philosopher, who impels us to think of ‘space’ beyond the conventional understanding of a ‘visible…appearance of separation’ of lines but as something which ‘embodies social relationships’, Kikon avers that people in this landscape ‘seldom dwell on geological maps’ but enact rich and textured stories of ‘extraction, resources, belonging, violence and friendship’ (pp. 7-8). As a corollary, she avoids ‘flattening the foothills solely as a geological and political space’ and instead analytically focuses on ‘how people’s relationships with their neighbors, families, and friends—including state and non-state actors—are produced’ (pp. 7-8). These complex and multi-layered relationships are examined in seven tightly organized chapters in the book and provide what the author claims, the ‘first multi-perspective resource ethnography of an oil and coal-producing region in India’ (p. 7).

The Assam-Arakan basin—the geological name for the foothills of Assam and Nagaland—is known not only for being one of the world’s oldest geological basins but also because it is one of the most militarized and violent zones where extensive extractive economic activities thrive today. Not surprisingly, these foothills from Gelakey in Assam and Anaki Yimsen, Naginimora, and Champang in Nagaland are dotted with multiple security checkpoints and barricades where state and non-state actors zealously guard and watch extractive activities under the cover of exceptional laws like the Assam Disturbed Area Act, 1955, and Armed Forces Special Powers Act, 1958.

It is in this securitized zone that the ‘triadic States’ of India, Assam and Nagaland intersect in ways, which produce complex state-society and social relationships. Kikon contends that the triadic States are distinctively marked out respectively as ‘military state’, ‘economic state’ and ‘cultural state’ (pp. 67-76). The immunity and extraordinary powers that Indian security personnel—Central Industrial Security Force, Assam Police, and Nagaland Armed Police—enjoy make lives precarious in these places, marked as they are by violence, surveillance, and overlapping claims of land and carbon ownership. Although Assam is projected as an economic powerhouse ever since oil exploration and tea trade as a global commodity began in the second half of the nineteenth century, the Indian state is criticized for reducing Assam to an ‘enclave economy’. The establishment of the Noonmati Oil Refinery in Assam in 1962 (p. 12) to redress the Assamese’s grievance of being reduced to India’s ‘internal colony’ fails to arrest the growth of armed groups like the United Liberation Front of Assam (ULFA). ULFA has been demanding ‘swadhin (sovereign) Asom’ since its establishment in 1979.