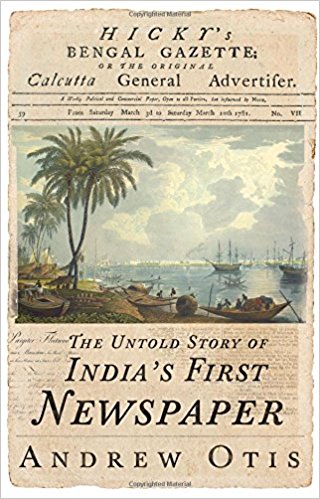 While there have been many accounts of the beginning of print in the Indian subcontinent, the enigmatic figure of James Augustus Hicky, the editor of India’s first newspaper, has eluded sustained scholarly attention. The popular perception of Hicky has been that of an irascible Irishman who repeatedly tilted with the redoubtable Warren Hastings and got thrown into jail for his pains. Beyond that, what we know of the journalist is lost in the potpourri of scandal, gossip and intrigue that marked the period characterized by Partha Chatterjee as the ‘black hole of empire’.

‘History has long misrepresented the founder of India’s first newspaper’, writes Andrew Otis in his preface to the story of Hicky’s Bengal Gazette. Part of the reason for this is the state of archives relating to Hicky’s time. Otis’s wry preface will ring familiar to anyone trying to access archives in South Asian depositories—the delays, red-tapism and the occasional stroke of luck. Nevertheless, Otis was able to get his hands on two crucial bodies of sources—the papers of Justice John Hyde, deposited with the Victoria Memorial in Calcutta and now happily digitized; and the archives of the Calcutta High Court dispersed over six locations. Out of these and other sources, Otis has been able to tell Hicky’s story in a refreshingly engaging style. From the dramatic prologue in which a broken old man lay dying in a ship called Ajax, the story of India’s first modern journalist moves at a cracking pace.