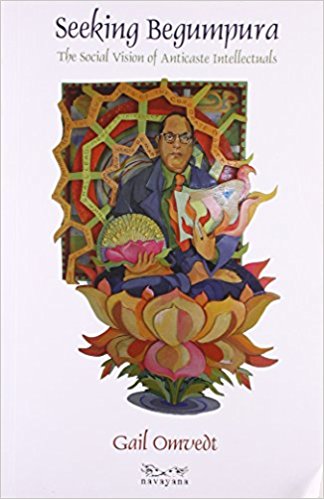 The book under review with its intriguing title is by Gail Omvedt, the pioneering historian of Jotiba Phule and his movement. Since the publication of Cultural Revolt in a Colonial Society (1976) Omvedt has maintained a steady stream of publications on Ambedkar and lower caste movements which have enlarged our understanding of dalit resistance and assertion. Her intellectual output, therefore, is the outcome of a longstanding scholarly and activist interest in lower-caste resistance movements and not impelled by academic fashion and political correctness.

Begumpura, in the title, refers to the utopia of the medieval Bhakti poet Ravidas. Ravidas’s Begumpura, a ‘city without sorrow, is a casteless, classless society . . . a land with no taxes, toil or harassment, where there is no hierarchy but all are equal’ (p. 7).

The running thread of the book is the argument that when Thomas More was conceptualizing an utopia in the early sixteenth century, in India too there was an indigenous envisioning of an utopia. While More’s utopia was rooted in high European humanism, the utopias dreamt of by Indian intellectuals came from subordinated sections and lower castes. The utopias envisioned by Indian intellectuals, argues Omvedt, came in two stages. The first was during the period from the sixteenth to the mid-eighteenth centuries. And after a setback of a couple of centuries, the second phase began with colonialism.