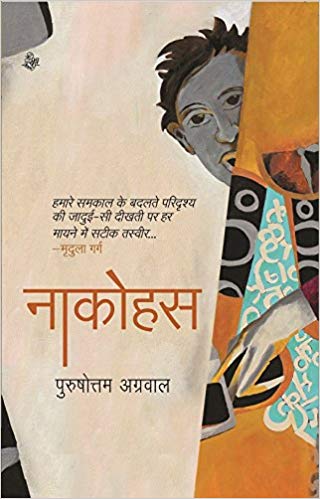 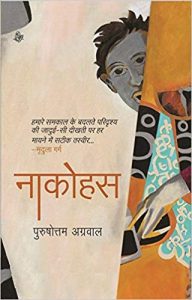 Dreams and reality merge in this 2016 dystopian novel by the well-known Hindi satirist and writer Purushottam Agrawal. The novel begins when a crocodile leisurely walks down a small street and begins to chew on the leg of an elephant who happens to be lying there. No one seems to notice. Then Suket, our protagonist, wakes from this disturbing dream, reaching for a glass of water. It is 3 a.m. In the next scene, over two hundred students are protesting Professor Suket for being ‘anti-national’. ‘Murdabad, murdabad! National sentiments hurt karne valon ko—joote maro salon ko!’ (Death to those who hurt national sentiments—throw shoes at those bastards!)

Agrawal’s novel is located right in our contemporary moment, in which threats to free speech and violence against secular and progressive writers have intensified. The assassination of Kannada writer MM Kalburgi in 2015 and the Award Wapsi movement that followed have only been confirmed by the figurative death of Perumal Murugan that year and the murder of Gauri Lankesh in 2017. All these events confirm a lawless, dystopian reality where open debate and discussion are seen as a threat to cultural and religious values, a situation that Agrawal brutally criticizes in this novel.

This is enshrined, in Nacohus, in the eponymous fictional ministry, the National Commission on Hurt Sentiments (Na+co+hu+s) whose stooges kidnap Suket and his two friends, Raghu and Shams, in order to teach them a lesson for their refusal to honour the sanctity of communal sentiments. Shams and Raghu wrote an article called ‘The Right to Blasphemy’, arguing that human progress is based on dialogue and the continual pursuit of an elusive truth, which might occasionally include questioning long-held religious beliefs. A democratic country should be open to such self-questioning and self-criticism. But Nacohus was established precisely to combat such a pursuit. For them, democracy means defending your sentiments from being hurt by others, at whatever cost: a world in which goli matters more than boli.

By contrast, Suket, Raghu and Shams represent an increasingly rare group of intellectuals who value free speech, whatever form it takes, even if it means defending controversial sources like Salman Rushdie and Charlie Hebdo. Indeed, Agrawal does not exempt progressives from his critique, as they are responsible for censorship from the other side. For instance, Suket’s Left-Wing friends and colleagues ironically agree with the conservatives that he should tone down his critique of religion: ‘Aap ek vivaadaaspad dhaanche ko masjid kehenge to sentiments kyon nahin hurt honge?’ (p. 13), they tell him. (If you call a disputed structure a mosque then of course sentiments will be hurt.)

The short, 164-page novel has a loose structure; six lengthy chapters with only the barest frame of plot. The majority of the text comprises conversations among the three friends, scraps of events they experienced, and fragmented memories of the past. There is a bleakness to these memories, as the three friends constantly feel under threat; already having been physically beaten numerous times, they worry about being actually killed. This creates a dark atmosphere underlying the possibility of violence. They thus take recourse to nostalgia, lamenting the present and constantly repeating the refrain: ‘Suchmuch jis duniya ke hum aadi the, woh badal gaya hai sada ke liye’ (p. 64) (Truly, the world which we were accustomed to has changed forever).

There is also a critique of the 24-hour news media, literalized by the fact that for a significant chunk of the novel, Suket keeps trying to turn the television off, but it keeps turning back on of its own volition, and then the remote simply stops working. As we later learn, this is due to Nacohus’s control over his television. But that image of the persistent television that can never be quieted and the screaming, hyperactive voice inside it stands for the ubiquitous presence of the 24-hour news in contemporary life. As Chaurasingh tells Suket, ‘Is Nacohus-kaal mein aap t.v. nahin dekhenge, t.v. aapko dekhega… sochne ka apraadh karne se bachaayega… chaubison ghante saath rahega… jaagte-sote, khate-peete’ (p. 68) (In this age of Nacohus, you don’t watch t.v., the t.v. watches you, it saves you from the crime of thinking, it stays with you all 24 hours, sleeping and waking, eating and drinking.)

The chapters are long and merge the present and the past. One chapter takes place entirely in the car that takes Suket from his home to the Nacohus headquarters, elongating that ride into an extended reflection on his past, including his two failed romantic relationships whose memories are intertwined with the moments of oppression and resistance that mark his disillusioned story. Another chapter takes place late at night in Raghu’s house, with his mobile phone incessantly ringing, trying to get his attention, while he refuses to answer it, until finally, in a particularly surreal scene, he opens his computer to have a red-faced, angry emoticon grab him and force him into the computer, where he joins Suket and Shams at Nacohus. This structure gives the novel a feel of individual snapshots, frozen in time. It shows the complexity of each character, from the details of how Raghu was beaten with chains for being a so-called foreign agent, and how he is constantly reminded of his Christian heritage despite being an atheist. He is told, for instance, that he cannot quote the Mahabharata but should stick to his ‘own’ texts for the sake of maintaining Indian secularism. Shams too, as a non-believer, is stuck between a rock and a hard place: haunted on one hand by the phrase ‘Pakistan or kabristan’ that violently refuses Indian Muslims’ inclusion in the nation, he is on the other hand considered a self-hating Muslim, seduced by majoritarianism, for his critique of the Rushdie affair and his dislike of political Islam.

There are ghosts everywhere, from the crocodiles that haunt Suket’s dreams to the misty face he sees outside the car on the way to the Nacohus headquarters, to the tub of laughing heads that taunt Shams, to the creepy chameleon that lectures them for hours in the last chapter of the book, constantly flickering its tongue and changing colour. In one of the strangest scenes, the chameleon, along with all the other ghosts gathered in the room, is sexually aroused while discussing how good it feels to punish someone for hurting your feelings and seems to come to orgasm while imagining the prospect. These ghosts confirm the sense of unreality that the novel wants to convey, an unreality of an India that is not recognizable to itself. Several of Nacohus’s stooges are, moreover, mind readers. Violence is also presented as ghostly, with Chaurasingh able to slap Suket without any physical contact and the chameleon able to have Shams beaten to a pulp by invisible forces. Both omniscience and such invisible violence contribute to a portrayal of a world beset by totalitarian forces of brutality.

Aside from this dark story, there are also some lines of brilliant satire, such as the narrator’s observation that ‘Meeting mein maujud science ke zyadatar professor sahibaan ek baar phir convince hue ki faltu ki cheezon mein waqt barbaad karna sahitya aur social science valon ki congenital disease hai’ (p. 15) (Most of the science professors at the meeting were once again convinced that wasting time discussing useless things was a congenital disease for literature and social science types.) There is also some beautiful, dark imagery, such as when the smell that pervaded Bhopal after the gas leak is described as, ‘jaise maut apna priya perfume dhaaran kiye party mein chali ayi thi’ (p.106) (as if death wore its favourite perfume and came to a party). There is also some lovely language play, as in Suket’s reflections that their lives are filled with ‘Yadein, yadein, yadein… bechainiyaan, nare, khaansiyan, phaansiyan, goliyan, boliyan’ (p. 39).

The very idea of inventing words, not only Nacohus, but ‘baunaisars’, or the ‘baudhik naitik samaj raksha’ (bau+nai+sa+r), shows both the flexibility of language and an awareness of a dystopian social reality in which language can be twisted for the most violent ends, as predicted by George Orwell in 1984. In fact, Orwell’s novel stands as an ur-text to this one, not only because of the violent totalitarian society it foreshadows but because of the very date it portends. While 1984 is securely in this novel’s past, it is presented as the start of India’s current woes, with the Bhopal disaster and the anti-Sikh riots both happening that same year.

The novel is dark, but perceptive and provocative reading. Like Uday Prakash’s Peeli Chhatri Wali Ladki, it counterposes its anger against present conditions with an occasional lightness in its use of surrealist imagery, which suggests that new politics must be supplemented by a new perspective. It is, even more than Prakash’s, a novel of ideas, but by developing these ideas in the minds of its characters, they seem situated rather than abstract. We come to like the three protagonists, and their personalities remain in our mind not only as containers of political struggle, but also for their irreducible humanity. In their idiosyncracies, they never quite become allegorical, and that is part of the beauty of this otherwise disturbing book.

Ulka Anjaria is Associate Professor of English at Brandeis University. She is the author of Realism in the Twentieth-Century Indian Novel: Colonial Difference and Literary Form (2012) and Reading India Now: Contemporary Formations in Literature and Popular Culture (2019), and the editor of A History of the Indian Novel in English (2015).

A Nostalgic Tribute to Indian Classical Music
May 15, 2019

From Dialect To Language: A Historic Struggle
May 15, 2019

Anatomy Of A Humanist Writer
May 15, 2019
Culture, Anarchy and Identity In Contemporary Hindi Novel
May 15, 2019