Down Grand Vistas of History 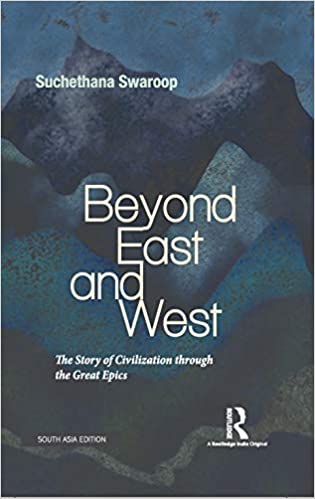 Down Grand Vistas of History
Meera Rajagopalan
BEYOND EAST AND WEST: THE STORY OF CIVILIZATION THROUGH THE GREAT EPICS by Suchethana Swaroop, translated from the original Kannada by N.S. Raghavan Routledge, 2019, 312 pp., 1495.00
June 2020, volume 44, No 6

A very intriguing title with the promise of opening up grand vistas of history. Let us see how far it succeeds.

The author starts out with the premise that the great epics, even in their oral form, have played a decisive role in the making of the history, culture and civilization of a society and that they also mirror these conditions faithfully. To prove his thesis, he has chosen mainly Homer’s Iliad, and Odyssey, Virgil’s Aeneid, Dante’s  Divine Comedy, and Milton’s Paradise Lost from the West and Vyasa’s Mahabharata, Valmiki’s Ramayana and Kalidasa’s  works to be examined. Myriad other less known compositions are also dealt with.

Homer (between the 12th and 6th century BC) was the first epic poet of the West. The society that his two great epics portray is barbaric in many ways and rather unsophisticated. Societal norms were very different then.  The errant Helen who runs away and lives in domesticity with Paris, returns to her first husband after the fall of Troy and the death of Paris. No recriminations, no great drama; the war seems to have taken place for the sake of fighting and it is terribly ferocious and unbelievably cruel. The ruse of the wooden horse is applauded and the total annihilation of Troy and its inhabitants is just shrugged off.

This is Homer who writes/sings of the Greek victory. Virgil (70 BC -19 BC), who follows is more sophisticated even as he writes about the vanquished in the war. Aeneas is a minor scion of the defeated Trojan side, whose destiny it is to found a new empire. Aeneas follows his stars faithfully, to the point of abandoning Queen Dido of Carthage whose unwanted affections hamper his mission. Forsaking the heartbroken queen (who subsequently kills herself), Aeneas single-mindedly follows his stars till he reaches Rome and establishes an empire. Many hazards and obstacles have to be overcome until he sets up the empire, but in every instance Aeneas shows himself to be more humane with natural anxieties and emotions. This is an improvement from the crude world of Homer and presages the coming of Christianity. Virgil, therefore, is the last great  ‘pagan’ poet of Europe, who was writing at the time when the Eurasian continent was splitting into Europe and Asia.