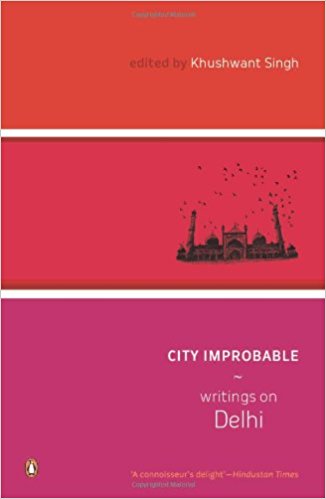 Cities are sites on which humanity plays out life. It symbolizes the vagaries of life or what we choose to call life. They share a symbiotic relationship with culture. If, on one hand the architecture, science, religion and politics shape the contours of life lived in the city, it is art, literature, music and food that give essence to the city, the character that makes the city.

City Improbable, as the title of the book suggests, is a reflection of the improbability of life per se. It is lived out in how we identify with Delhi today in all its historic avatars. No matter who has tried to nurture the city, the improbability of fully becoming is in the very nature of Delhi.

Delhi at the outset appears to be a tragic story which is perennially doomed to strive towards glory. In this continuous flux it has found its place as one of the greatest cities of the world. It embodies human strife like no other city.

It is a dream hopelessly set to carry on eternally. Much like Atlas, Delhi almost struggles to reach the pinnacle and then collapses right to the bottom from where the illusion of hope begins again. Chalo Dilli may have been a tagline of the twentieth century, but it carries with it a ring of centuries of conflict left with traces of human strife and success, spewed across the city.

The city gets formed through multiple voices, but Khushwant Singh chooses voices which capture the shifting nature of Delhi. The transient world and sometimes the reminiscing of the world that was. City Improbable is a delightful anthology of Delhi. Khushwant Singh’s selection is not just of an erudite reader. It carries aspects of the city that capture the whole of humanity lived out via Delhi. Sitting as if on the Dehleez itself, the eternal site on which Delhi plays itself out. The selection of the anthology has a fine balance between the soft and the hard city. To quote from Jonathan Raban in Soft City,