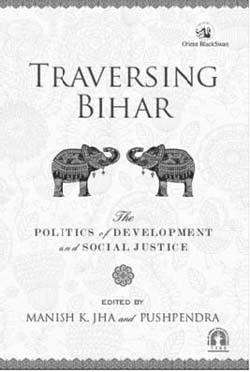 Traversing Bihar portrays Bihar’s inter¬nal contradictions and struggles and is an attempt to interpret some of the paradoxes existent in contemporary Bihar. The issues addressed in this volume are agrar¬ian reforms, upper-caste dominance, back¬ward caste assertion, social movements and particularly Naxalite movement, floods and governance.

Of the three sections the first deals with the politics of development that is an out¬come of paradigm shift in Bihar. The con¬tributors have looked into issues of land re¬forms, agrarian relations, growth-oriented notions of development, policy failures to deal with devastation caused by frequent natural albeit man-made disasters, social ex¬clusionary processes and government as well as private initiatives of inclusive develop¬ment. Dipankar Bhattacharya explains the paradox of ‘change and continuity’ (p. 23), highlighting the absence of land reform and no reduction in migration of labour from Bihar. Pushpendra presents a detailed inves¬tigation into land, labour and credit rela¬tions through a case study of Village Jitwarpur in Bihar. He explains migration very well in the context of land, labour and credit relation. He also highlights the de¬bates in the 1970s and 1980s regarding mode of production in agriculture. The essay also examines the land distribution pattern both owned and operated, and is a detailed in¬quiry into leasing practices. Anamika Priyadarshani in her essay argues how the notion and articulation of development has been a rhetorical project since its inception in 2005. The essay attempts to explore what impaired people’s vision while reading, see¬ing and experiencing violence around them. Dinesh Mishra’s essay deals with floods, one of the most persistent problems of Bihar. He is very critical of programmes and poli¬cies for flood control. Meera Tiwari in her article describes the bottom-up approach to social inclusion through a case study. It also explores the Government of India’s affirma¬tive action model through its reservation policy and two grassroots case studies with a bottom-up approach to address social exclu¬sion.
The era of 1990s and thereafter are very significant in the politics of Bihar. It offered an alternative to the notion of social justice questioning conventional knowledge about the concept. Dignity for the backward castes and commitment to the practice of secular¬ism were top priorities for the new politics of social justice. The second section of the book traces and examines the experiences of social justice in the realm of both electoral politics as well as social movements. It cov¬ers issues related to the politics of social jus¬tice. The essays in this section make inquir¬ies into the politics of social justice by exam¬ining the experiences of both electoral poli¬tics as well as social movements. Manish K. Jha’s essay highlights how episodes of injus¬tice and indignity became the rallying points for transforming the downtrodden to politi¬cal subject. Through a case study of a village he points out the internal contradictions and conflict among different Naxal factions and fragmentation of the collectivity of political subjects due to various parallel political pro¬cesses (p. 121). This essay analyses the expe¬rience of marginality and process of resistance by the subjugated dalits and the ‘extremely backward caste’ (EBC) groups in the plains of south Bihar.
Gaurang R. Sahay’s essay revisits the Naxalite movement and caste-based militia within the conceptual frame of human secu¬rity. He problematizes the concept of hu¬man security and argues that ‘freedom from fear’ and ‘freedom from want’ are not the two sides of the same coin (p. 144). He high¬lights at one place where movement contrib¬uted in realizing ‘freedom from want’ by fo¬cusing on economic issues but its violent means created fear in the minds of its oppo¬nent. Manjula Bharthy’s essay is a detailed empirical study. According to her women who enter the institution of local self-gover¬nance confront, negotiate or succumb to power structures at different levels and spheres—the self, family, community, soci¬ety, the gram panchayat and the state (p. 122). She highlights the role of PRIs in shifting the focus of political power struc¬ture.
Ashutosh Kumar’s essay examines the paradigm shift in Bihar politics from Lalu’s ‘presence’ and ‘dignity’ politics to Nitish’s politics of development. Sanjay Kumar points out the shift in Bihar politics from caste to development. Mohammad Sajjad traces the changing contours of issues and approaches that have a bearing on the Muslim commu¬nity in Bihar. It also talks about the long movement by the community for emanci¬pation and empowerment.
The third and last section where two essays show how the ambitions of social jus¬tice and development have been depicted in the folk tradition and also in vernacular lit¬erature. The essays in this section explore articulation of various conceptions of justice and development in the realm of folk tradi¬tions and literature. Badri Narayan’s essay portrays non-brahminical art and culture of the marginalized dalit communities through an alternative folk medium. He explains Bhagit folk and its trans-border impact. He also highlights the importance of shared memory where traditions are sustained across borders. The last essay of the volume is by Sudan Jha, entitled ‘Purnea: Landscape of Cul de Sac’ in which he explores a scenery of backwardness. The beauty of this essay is that it draws from postcolonial Hindi literature and deals with the problem of backwardness challenging the notion of development in the discourse of modernity.
Traversing Bihar is a depiction of chang¬ing contours of politics of Bihar. It gives a broad socio-economic and political under-standing of the State of Bihar. By touching almost all the aspects inspecialized contri¬butions in the particular area.
Md. Irfan is Research Scholar in Department of Political Science, Jamia Milia Islamia, New Delhi.