Deadlocks with Agreement in International Trade 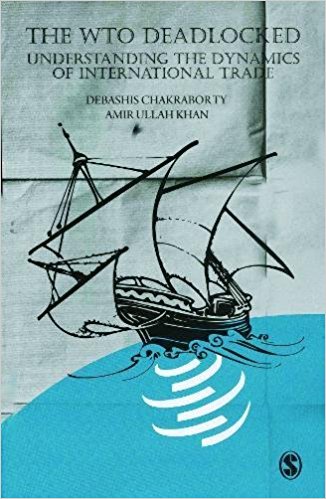 WTO could undoubtedly be considered as the most influential among the different multilateral organizations established after the post-World-War period. It was founded with a view to augment the process of globalization through multilateral trade liberalization by removing all the man-made restrictions on trade. WTO has many unique features, perhaps the most notable being the inbuilt provision for a democratic process in decision-making wherein each member country, regardless of its economic and political power, was entitled to participate in the negotiations for arriving at various agreements. Though the mandate of WTO was trade liberalization, the agreements went beyond trade to various others spheres that are linked to trade like capital mobility, intellectual property, labour standards, phytosanitary conditions and others. While the WTO stood for multilateral trade liberalization, the post-WTO regime witnessed an unprecedented growth in regional and bilateral trading arrangements under Article XXIV of WTO on the one hand and the formation of developing country groupings to articulate their collective interests not-withstanding the conflicting interest among themselves.

In a context wherein the WTO negotiations turned out to be prolonged and met with failure during the Seattle Ministerial and Doha Round negotiations, the book under review presents the negotiating history under GATT and WTO with focus on India.

Divided into eleven chapters, the book begins with an evolutionary picture on India’s participation in the GATT/WTO forum. It shows the transition from inadequate participation in the negotiations during 1960s and 1970s to an increasing association over the last decade. A special focus is on India’s changing outlook toward the WTO and the negotiating process from the Singapore Ministerial (1996) to the Hong Kong Ministerial (2005).

In the subsequent chapters the study discusses the negotiating strategies followed by India on its key areas of interest. These include, in addition to agriculture, NAMA, and services, textile sector, sanitary and phytosanitary concerns and technical barriers to trade, contingency measures like antidumping duties, countervailing duties and safeguard measures. India also joined the bandwagon by entering into a number of regional trading arrangements which has also been a subject of discussion in one of the chapters. The dispute settlement mechanism, a unique characteristic of WTO is the focus of the penultimate chapter followed by the chapter that explores India’s future options in the multilateral negotiating forums.

The Agreement on Agriculture is perhaps one of the WTO agreements having significant bearing on a number of developing as well as developed countries. The two major issues under AoA, subjected to substantial discussion related to higher agricultural subsidy in the developed countries and those relating to tariffs. RIS (2003) has shown that agriculture trade liberalization in developed countries has been undermined by dirty tariffication. The average applied tariff rates for agricultural products compared to those on industrial goods have been higher by 641 per cent in Japan, by 353 per cent in EU and by 100 per cent in the US. The chapter on AoA presents India’s negotiation strategy in different WTO forums and undertakes an exploration of the actual violation of AoA that turned out to be mostly at the instance of developed countries like the EU, US, Japan and Canada. However, the reader might be disappointed if she looks for an analysis of the plausible rationale for India’s position.

The sanitary and phytosanitary measures relates to the minimum human, animal or plant health related measures that have been specified under WTO with a view to prevent the transmission of disease causing agents through imports. Technical Barriers to Trade (TBT) measures are concerned with the adoption of stringent production process or packaging and labeling requirements. There are evidences indicating that imposition of SPS standards by the developed countries have acted as a barrier to trade resulting in increased profitability for the firms in developed countries. Similarly, TBTs including the specification that polluting countries should have a green label requiring that clean production process has been followed. Needless to say the SPS measures and TBTs have been a source of discord between developed and developing countries. From an analysis of the completed WTO cases the authors find that the major proven case of SPS agreement concern Article 5.1 dealing with the adaptation of SPS measures to regional conditions. The study, therefore, calls for, apart from technological upgradation, efforts to confirm production and marketing to confirm to international norms of hygiene and other standards.

The problems of tariff peaks and tariff escalation, reduction in average tariff over the years notwithstanding, continues to be a major issue under WTO. The Non Agricultural Market Access (NAMA) is yet another issue that has been dealt with in the book. Studies (eg. RIS 2003) have shown that a number of developing country exports like textiles attract tariff peaks and the developing country exports are also discouraged by imposing higher import duties as the level of processing goes up. Interestingly, the issue assumed added significance in a context wherein a large number of developing countries are entering into the export of manufactured goods. After detailed discussion of NAMA negotiations it is concluded that an agreement of modalities remains a distant dream. It has also been argued that the phasing out of MFA regime by 2005 would be beneficial to countries like India and China. However, the estimates revealed that the comparative advantage in India is found to be much lower compared to many of the competing countries. No wonder, India’s export performance in textile and garments has been less remarkable in comparison with China which was forced to impose export tariff on its textile products.

In a context wherein antidumping subsidy and safeguard measures are indiscriminately being used against the WTO provision of their deployment only under emergencies, the chapter on antidumping, countervailing measures and safeguards mechanism becomes highly relevant. In this chapter, we find a detailed analysis of the incidence of such cases at the global level and those cases where India is involved and certain areas where modification in these agreements is called for is highlighted.

The service sector has already emerged as the driver of the Indian economy and it is from service exports that India’s external sector derives much of its vitality. Hence, after highlighting the importance of service trade in India the study has presented barriers to trade in services and negotiations in service trade with a focus on issues of concern to India especially the Mode 4 centric ones. IT and software service sector has emerged as a major player in Indian service exports. Despite scholars’ (eg. Joseph and Parayil 2008) concerns with the implications of Information Technology Agreement of WTO (Singapore Ministerial) it has not drawn the attention of the authors. In the light of various issues taken up for discussion the study underlines the need for India to strike a nuanced balance between opening up of its own service sector for the foreign players while negotiating greater access for its service in the world market based on a better understanding of the impact assessment.

While WTO aimed at promoting multilateral trade liberalization and many of the leading scholars felt that regional and preferential trading arrangements are stumbling blocks to world trade much of world trade and investment take place today not on MFN basis but on preferential terms. In such a context, the reader finds a detailed analysis of the various provisions of article XXIV of WTO that provide for the establishment of RTAs and PTAs and various loopholes in this article. The study also explores the transition of India, known for its commitment to multilateralism, towards PTAs and RTAs in the late 1990s and various issues associated with such arrangements. It is argued that while the RTAs might be helpful for India in the short run, given the RTA explosion all over the world its competitiveness would soon be challenged by the partners.

By correcting one of the major drawbacks of GATT, WTO provided for a rule based Dispute Settlement Mechanism. As the developing countries have been increasingly participating in global trade especially in manufactures in a context wherein the developed countries have been raising their protective barriers there has been an increasing need for countries like India to make use of this provision. Similarly, to the extent that the developing countries are not capable of complying with the various standards being imposed on their exports, the developed countries also get induced to use the dispute settlement system. So far members have not succeeded in arriving at an agreement on modalities even in important areas like agriculture and NAMA; the new sets of issues are also likely to come up in the years to come. Yet, the fact that over 373 cases have been registered during the first 13 years indicates the confidence of WTO members in the dispute Settlement Mechanism and its wider utilization. It should also be noted that the developed countries, especially the EU and the US, have been the major users of this provision. The study in this context has examined India’s participation and various submissions that India made to WTO towards making the system more developing country friendly, inter alia by bringing down the cost involved in accessing the dispute settlement mechanism and by enhancing the transparency of the system.

The book is an attempt to present a comprehensive picture on almost all the important issues of concern especially for the developing countries under WTO. However, there are certain issues like Information Technology Agreement that have not attracted their attention. While the broad canvas of the book is one of the sources of strength of the book, it also turns out to be a source of weakness because none of the issues finds a comprehensive treatment. Very often the discussion turns out to be a narrative without an appropriate framework of analysis. The book does provide a detailed overview of India’s negotiating strategies on different issues and presents an analysis of violations of these agreements on the basis of WTO case laws and makes the case for future reform of the violated provisions.