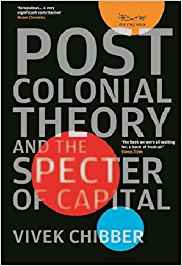 Have postcolonial theory and subaltern studies in their attempt to point towards difference, consciously or unconsciously, reproduced colonial ideology and an Orientalist description of the subaltern and her politics in India? Have they arrested the agency of the peasants and working class in assuming that modern democracy and the language of political rights was the gift of the bourgeoisie? Do they indulge in the culturalization of the economy and politics in assuming culture as a meta-category to explain events, historical and contemporary, in Indian politics and undermine the sagacity of Capital and its capacity to universalize itself, even where pre-capitalist modes of cultural expression remain? Do they commit a category mistake in selective rendering of history in assuming that modern forms are more regulatory than the ‘traditional‘ structures of caste, clan-based enumeration, and bio-politics of untouchability? Vivek Chibber‘s book is unequivocal in answering these questions in an affirmative voice and highlights these as serious theoretical and epistemic limits of postcolonial theory in general and Subaltern Studies in particular.