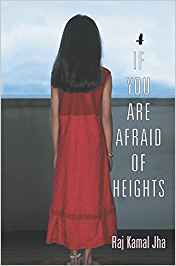 You must learn to stop being yourself. That’s where it begins, and everything else follows from that.’ Raj Kamal Jha uses this most apposite quotation from Paul Auster’s Mr Vertigo to preface his second novel. I call it apposite because the entire book follows from that. Let me say that this is not a book for those who prefer to stay within their own skins or constantly want to feel the solidity of the walls that surround them. After The Blue Bedspread, Jha has proven once again with If You Are Afraid of Heights that those who read him must be willing to let go, take a chance, be whisked away on a roller coaster whose apogee is invisible, lost somewhere in the clouds of the unknown. They must be willing to give up the comforting shores of sequence and plot and walk instead in the woods of fragmented memories, midnight fears and twilight shadows. That is the only way to enjoy the writing of Raj Kamal Jha, any other will only invite frustration. In fact Jha is very much like the man in his novel who invites a street crowd to take rides on his crow and see the city. In the words of that man, he too could well be telling his readers, ‘If you are afraid of heights, brothers and sisters, I have nothing to show you…’

Anybody who has read Jha’s two novels would not be blamed for wondering: Is Jha the working journalist of the daytime or the enigmatic poet of the night? And therein lies the tormenting question that Jha plays with again and again in If You are Afraid of Heights. Who really are we? Are we really the three dimensional beings of flesh and blood, solid as we stand, or are we someone else, somewhere elsesomeone we would like to be, someone wefear to be, someone we have admired or perhaps hidden away from ourselves. Would one give up an entire lifetime of ‘real’ existence for a few moments of fantasy, the kind of fantasy that can be triggered off by a chance newspaper headline, a film poster, and advertisement in a bus? In the process of exploring this teaser, Jha takes us to the land he knows best: the land of dreams and nightmares, those episodes of the real-unreal that we wish upon ourselves in our momentary freedoms and those that come creeping upon us again and again, taking advantage of our solitary vulnerabilities. With a sure hand he leads us through the unmapped crevices of the forgotten past or the unexpected future and leaves us there with our ghosts, our fears and hopes, shadows that flutter like many-hued butterflies as soon as the eyelids are shut.

If You are Afraid…. could be the story of ordinary, very ordinary people living out unromantic existences in crowded Calcutta. The relentless stolidity of such existence can drive people to suicide. But Jha’s chatacters survive; they overcome the urge to escape through death, essentially because they dare to dream. They have the sense to occasionally reach for the heights, to hover above the world as it meanders from day into night into day. The dreams that Jha conjures up for his characters are not hazy, cloudy and nor, for that matter, are they beautiful. His strength lies in making these dreams real enough to .touch. The smells, the cracks, the insects, the glistening antennae of these insects are all there. The details effortlessly paint pictures a paragraph long that give Jha’s writing a multilayered texture that can only be admired.

The novel is structured into three clear sections. The first tells the tale of a post office boy, whose daily job is to write letters for those who cannot write, send precious money orders, seal envelopes and stamp them. A tram accident transports the post office boy to another world, a world of glitter and glass in a high-rise building, a world where he finds a beautiful companion only to lose her to the sound of a child crying in the night. The second section is the story of a woman journalist, following in a small town in Bengal the story of a young girl who was raped and killed and thrown into a canal. And the third part is the story of a child and her true friend, the Rushdian character who rides back and forth over the city on the back of a crow, a crow that eats cream-biscuits chicken with rice. Jhas enigmatic style ensures that these tales ate not as straightforward as they sound. Is the post office boy really himself or is it someone else imagining that is a post office boy? Is the journalist really herself or is she perhaps just a simple house­wife imagining herself as a journalist? And what are the events in their pasts that propel these protagonists to pursue the path that they do?

The reader is never quite comfortable in course of the novel, trying: to grasp the link between evidently disjointed sections. But the tales are separate and yet there are common; ties; repeated images connect different aspects, hints are deliberately and carefully planted t foreshadow events that will become clear mi later on. It is in the third part that the book finally comes together and one realizes how deftly Jha has worked it all out. In doing soj successfully rejects the criticism that he does not write to a plan, only the plan is a shadow one that slips even as one grasps at it. What remains in hand are stories, stories that the crow-man tells the child, are made up ‘of the dreams your father and mother have, the worlds they travel to, with their eyes open and their eyes shut.’

The twilight world that Jha strives for, the place between the real and the unreal, is an attractive place. It is epitomized by my favourite sentence from the book: ‘You don have to talk, let’s wait until you get better.’ 1 this permanent state of gray there can be enough happiness. After that does one really care if one gets better or not? As long as one can be in a dream that does not break, as Ion as one can rest, as long as one does not have talk.

Navtej Sarna, currently the official spokes­person for the Ministry of External Affairs, is the author of We Are Not Lovers Like That and The Book of Nanak (both Penguin India. 2003).