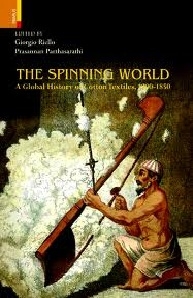 Velli midi palagai vengalathal nadavum Alli midi midikka adainjavanur vun- mamam. Saliya weavers in south India today still sing of forefathers that wove on looms of silver and ropes of bronze. Their ancestral records tell of temple gifts encrusted with 20,000 pearls and their equivalent weight of gold ornaments; of private armies and the attempt of rival kingdoms to lure weavers to their courts. It is a far cry from those days of affluence, power and prestige to the sad cry of one present day weaver: ‘It is the grave pit, not the loom pit.’

The Spinning World: A Global History Of Cotton Textiles 1200-1850, edited by Giorgio Riello and Prasannan Parthasarathi tells the story.

Riello is Professor in Global History at the University of Warwick and Parthasarathi is Professor of History at Boston College. This absorbing book is a compilation of essays by twenty scholars residing in nine countries and three continents, who came together at two international conferences held in France and India in 2006.

This scholarly yet intensely readable book contains the fruits of intensive research over a four year period, spanning China and Japan, the Ottoman Empire, South East Asia, East and West Africa, Italy, France, Germany, the Netherlands, and South America. It tells many amazing stories and holds a myriad fascinating facts, but what emerges most strongly is the HUGE importance of cotton, alongside the equally huge impact of Indian textiles on consumption and production worldwide over the centuries. While the book deals with the production and sale of cotton all over the world, ranging from China and Europe to Africa and Latin America, inevitably India dominates, and it is the India story that is of primary interest to Indian readers.

It is a spell-binding though somewhat sad chronicle. It is also important. The story of the Indian handloom weaver is the story of all craftspeople in India today, and it is not only the British East India Company that is the villain of the piece. Indian society and the complacent acceptance by the craftsmen themselves of Indian cultural ethos and their own unchanging place in it—their inability to forecast and plan for the stresses that western influences and modern technology would put on them, have been a primary source of the displacement and marginalization of craftspeople all over India today. Lord Bentinck, in mid-19th century, had the perception to see that the Industrial Revolution in England, and the East India Company’s resulting switch from exports of Indian fabric to export of raw cotton and re-import of manufactured mill fabric would result in ‘the bones of the cotton weavers bleaching the plains of India’. A century and a half later, most of our planners and politicians have still not grasped this message.

Cotton textiles acted as global commercial, cultural and social connectors; they supported agrarian structures, local manufacturing economies, and systems of taxation; they were a sector of dramatic technological innovation, experimentation, and transfer; and finally they were sought-after commodities that shaped taste and material expectations of populations living across the vast Eurasian landmass and beyond.

‘Cotton cloth was the first global commodity’, and cotton ‘the most important manufactured good in world trade,’ with the Indian subcontinent the ‘pre-eminent centre for cotton manufacturing in the world till the 19th century.’ Cotton originated in

India—fragments have been found dating to 3200 BC, and 11th century cotton printed cloths from Gujarat found in Fustat in Egypt testify to an already existing international market. John Irwin says that in the 15th and 16th century, ‘Gujarat was unquestionably the most renowned source of commercial embroidery in the world’. How surprising to learn that Delhi was known for its cotton weaving and ancillary skills such as dyeing and block printing, with thirty-five different varieties of cotton cloth produces between the 13th and 16th century. How sad that none of these survive in our polluted industrial jungle!

Amir Khusrau wrote in the 14th century that muslins were ‘like a pleasant gift of a springtide and sit as lightly on the body as moonlight on the tulip or a dewdrop on the morning rose.’ Josephine Bonaparte and Jane Austen’s heroines loved delicate ‘Sprig Muslins’ printed with floral butis on white grounds, while the African market had an ‘voracious appetite’ for woven checks and stripes in blues and reds. The demand and consumption of Indian cloth, both domestically and internationally, from the 16th century onwards, led to growing prosperity in the subcontinent. ‘The growing of cotton, the spinning of yarn and the weaving and finishing of cloth provided employment and income to millions.’

‘Agricultural work was seasonal and spinning provided a valuable source of income for peasant farmers in the slow months. In addition, spinning’ (and weaving) ‘provided a form of insurance for peasant families in lean years.’ (Something Indian economists and planners need to take on board when they agonize over the decline in rural employment and earning.)

It is important too to realize that Indian textiles were not produced exclusively for the export market, as is sometimes suggested by western scholars. They had a huge and widespread indigenous market, and fabrics of all kinds were produced all over India for all kinds of buyers, not just for the court and temple. ‘Cotton textiles …. articulated a language. Such language was social and had specific expressions, vernacular uses and syntactic structures based on taste and custom’. There is a lovely image of an 18th century Gujarati beau which illustrated how textiles travelled all over India for local consumption: ‘His angarkha was of thin Dacca muslin, tight-fitting and embroidered. His dhoti came from Nagpur, and had the broad red silk border which even the rich coveted… he never went out of doors without first donning a newly dyed and fresh-folded deep-red turban from Nadiad.’

Despite my rather India-centric review, The Spinning World has wonderful stories and insights on cotton production and marketing all over the world. It explores the global ways in which ‘desire and demand, reciprocal sacrifice and power interact to create economic value in specific social situations.’ Delightful ‘Aunty Huang’ for instance, who in the 13th century almost singlehandedly turned Central China into a cotton growing and manufacturing centre. And how many people realize that the word Denim owes its origin and name to its originally being from ‘de Nimes’, jean cloth from Genoa! Reading The Spinning World, we remember too that the story of the rise and fall of handloom cotton was replicated in Europe as well. By 1761, Cremona in Lombardy, once the producer of 60.000 bolts of fustian cloth—‘an industry that once employed tens of thousands of labourers, including well over 2,000 weavers, now provided work for a mere 300’. How many unique European textile techniques and traditions were lost due to mechanization and import of mass-produced low cost goods. This was paralleled later in Japan, China and Africa. Interesting too, that it was not only in India that certain fabrics were reserved for certain classes—the British East India Company laid down strict specifications on who in England should be sold ‘strong blew Cloath’ and who ‘white middling’ and how some be reserved and ‘fine enough for Ladies and Gentlewomen’!

In the 15th and 16th century, everyone —prince, priest, pauper—wore Indian cotton. A tradition, started by the Greeks and Romans, decreed that high fashion, from Paris to Penang, meant Indian muslin and chintz. Five million yards of cloth were dispatched from just one port in Coromandel to Malacca each year. The local market, producing cloth for the village haat, as well as temples and courts all over India, was equally profitable. Weavers were an important, powerful section of society, raising their own regiments, building and maintaining their own temples, inching their way up the caste hierarchy, and being given incentives, land concessions, and tax exemptions by rival Rajas to tempt them to settle in different parts of the land.

This heydey ended because of Europe’s ‘capacity to coerce labour, allure consumers, and dominate world markets’.

With more and more foreign ships and merchants sailing up the Coromandel coast in the 18th and 19th centuries, weavers became greedy. Instead of the tiered, balanced division of production into export, high quality, made-to-order, and standard local retail, with production and sale both controlled by the weaver guilds themselves, all production became geared to export—from cheap indigo cloth for the slave trade to batiks for the Malay and Dutch East Indies and fine muslins and calicos for Europe. Design and marketing passed out of the hands of the weaver guilds into those of middlemen agents only interested in their own quick profits.

Once the Industrial Revolution became a workable reality, the British were quick to see the threat that Indian handloom textiles were to their own newly mechanized textile industry, and equally quick to impose bans and restrictions. Indian weavers, alas, did not see the corresponding threat to themselves. By the time the export glut had petered to a halt they had alienated themselves from their own local markets, soon to be displaced by modern mill technology, as well as trends and tastes they were no longer in pace with. Once a vital strand of Indian life, with metaphors of looms and weaves illustrating sacred texts and parables, the weaving community, by surrendering their diversified markets and products and the direct control of making and marketing them, had lost its finger on the consumer pulse.

The geographical movement of raw material and trade over the years is fascinating, and of course has huge political and economic consequences, Those of us working with handloom today know how the scarcity of appropriate locally grown raw cotton has impacted on production and prices as cotton fields in traditional weaving clusters become industrial zones or are turned to growing tobacco. More and more handloom weavers (estimated at 15-18% every decade) are leaving the sector.

Every day, somewhere in India, some traditional weave, dye or design dies—as do numberless other craft techniques. Flowered Chinese and Taiwanese mill-made prints and polyesters mushroom in every street and market, while an indigo dyer with a tradition of 500 years earns 25 rupees a day as a casual labourer in Karnataka, while jamdaani weavers of intricate gossamer sarees dismantle their looms to pay their debts. Meanwhile, ironically, society ladies in Delhi pay thousands of rupees for an antique Paithani or temple saree, or a Masulipatnam chintz, which could easily be replicated today, generating income and employment, if the infrastructure for establishing links between raw material provider, producer and customer were right. Ironically too, this is a time when eco-friendly and organic ‘hand-woven’ and ‘hand-made’ have the value of a designer label in today’s environmentally aware global consumer consciousness, and new demand and markets are emerging. The skills to make India a global handloom hub once more still exist but they are dying for lack of proper infrastructure. And—since the skills of craftspeople are in their hands and minds, not in text-books—it is important we capture them and their stories on paper before they disappear.

This book is essential reading for all those interested in Indian handlooms and the handicraft sector. Nevertheless it is meaningless unless the craft—and its producer—survives. The lessons of the past contained in The Spinning World need to be noted.