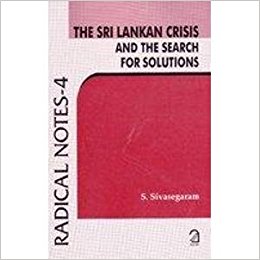 Although small, the book under review encompasses everything one wants to know about the Sri Lankan ethnic crisis. It traces the historical development of ethnic and national consciousness in Sri Lanka, the development of the contradictions and their transformation into national conflict, oppression and war; identifies the respective roles played by ethnicity as well as class interests and ideology; deals with the different class-and ideology-based approaches to the solution of the national question; dwells on the role of forces of foreign domination in aggravating the problem; and prescribes solutions. As a part of the Radical Notes booklet series, the book looks at the Sri Lankan ethnic crisis from a ‘counter-hegemonic perspective’. The framework and vocabulary, therefore, is Marxian.

According to the author, contradictions based on identity that were dormant under colonialism in Sri Lanka came to the fore as a major issue when ‘bourgeois elite class replaced the colonial masters’. The emergence of Sinhala-Buddhist chauvinism since the late 19th century gradually led to ethnic cleavages. The Muslims became the first targets due to business rivalries early in the 20th century; in the thirties the Malayalis were attacked for anti-Left political reasons; immediately after independence it was the turn of the Hill Country Tamils, who were politically disarmed; and finally, in the fifties, the Sinhala-Buddhist chauvinism took on the Sri Lankan Tamil community on language and other issues.

While other minority communities meekly surrendered, the Sri Lankan Tamils responded to the Sinhala majoritarianism in two forms. Initially, the protest was peaceful under moderate Tamil parties. However, these parties lacked vision; they organized themselves ‘poorly’ and their campaigns to win their rights were ‘rash’. For this, the author finds fault with the ‘anti-Left’ nature of Tamil parties like the Federal Party and the All Ceylon Tamil Congress. As a result, they ‘actually defended the Tamil elitist interest’ and did not hesitate to align themselves with main Sinhala parties for political reasons. The cry of ‘Tamil Eelam’ was only a ploy to placate the disgruntled Tamil youth and deter them from militant activities and a means of reversing their declining electoral fortunes. The hollowness of moderatism paved the way for radicalism. Numerous Tamil militant groups, who were ‘petit bourgeois in outlook’, came to the fore especially after the 1983 ethnic riots. They were never united and the ‘desire for personal power led to splits and brutal elimination of rivals and when India imposed its solution on them in 1987 the divisions were too deep to be plastered.’