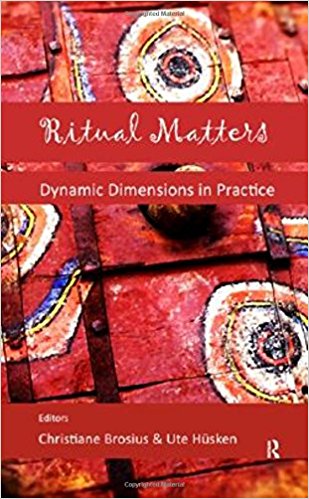 Ritual Matters is an anthology of essays visualized as a contribution to ritual studies. These presentations were part of two sets of conferences held in 2006. Almost inevitably, some of the papers are more interesting than others, but before turning to the specifics it may be worth outlining some of the issues raised by the editors in their introduction. One of the ideas that will appeal to most readers is the refusal of the editors to try and capture an essence of ritual within a delimited definition—to allow for fluidity and flexibility, the dynamism that they suggest is evident when rituals are contextualized in terms of historical, social and structural process (p.ix). Having said that, the claims to the novelty of this approach need to be viewed with some caution. With reference to the early Indian context, for instance, scholars like Fritz Staal (who does not figure anywhere in the citations) have provided thought-provoking, if not provocative insights into ritual praxis within the Vedic tradition. Also, P.V. Kane’s monumental work on the Dharmasastras documents, amongst other things, both continuity and change within brahmanical rituals over the centuries.

While Kane may not have framed his project within the vocabulary of dynamism, his stolidly old fashioned encyclopedic work has enabled generations of scholars to access material on a variety of ritual traditions. The suggestion that rituals have by and large been viewed as static (p.22) appears, then, to be a bit of a straw man, set up in order to be demolished by what are often only apparently fresh and novel approaches. There are other generalizations as well—we learn (p.15) that the connections between ritual and economy have hardly been explored. Once again, if we recollect the contributions made by scholars such as R.S. Sharma and Romila Thapar, amongst others, and the ways in which they have attempted to contextualize and understand Vedic rituals within their material milieu, the claims of the editors seem unwarranted. And, while rituals are not essentialized, there seems to be an implicit, and occasionally explicit essentialization of East and West (p.11, 14) that is sometimes troubling, even as the editors and the contributors attempt to explore how rituals, especially through performance, transcend and transform spatial and social relations in a variety of ways. One also notices the predominance of non-Christian rituals within the traditions opened up for investigation.