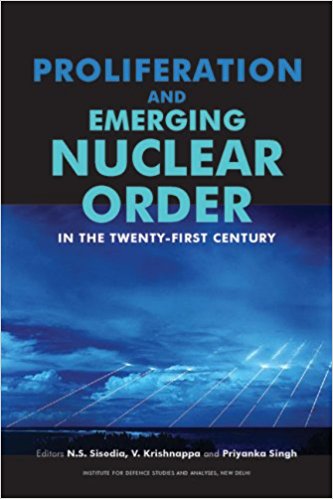 This is a slim volume, but attempts to grapple with the problems of nuclear nonproliferation in the most contentious areas of the world.
The book opens with a remarkable Address by the External Affairs Minister, Pranab Mukherje, which needs some comment. Unusually for a minister, this is a frank essay that speaks of the economic shift of the center of gravity to Asia, accompanied by a demographic shift too, as China and India grow to stable levels of population towards the middle of the twenty-first century. That India is placed centrally to exploit the Asian rise is also true, as well as the Minister’s recommendation to stabilize the supply and demand side of nuclear technology. Mukherjee loses his way extolling the Rajiv Gandhi action plan for disarmament, which was a good plan but does not exist any more in the world’s memory. The Minister is forthright in stating that India would not like to see any more nuclear powers, that the Taliban must be defeated and Iraq should become a stable country.

His speech writer muffed it again when the Minister mouths platitudes about multilateralism when only a hegemon can actually get things done., like the Indo-US Nuclear deal.

Rajesh Rajagopalan has his fundamentals correct when he says nuclear weapon proliferation is most threatened by repeated state breakouts—‘that hegemony is important in the establishment and health of regimes’ and explains that ‘a transition from a hegemonic to a multipolar order could lead to the decline of all types of international regimes, because no single power will take the lead in regime maintenance.’ These two views sum up the huge distance between realism, logic and practicality and a Congress government stuck mouthing platitudes as in the days of foreign policy inaction and the Hindu rate of growth. The situation is best illustrated in the Indian demand for a multilateral solution to illegal seaborne nuclear commerce and the refusal to accede to the PSI. The truth is that the multilateral initiative exists—the SUA (Suppression of Unlawful Activities), a UN effort that in 25 years has intercepted nothing.