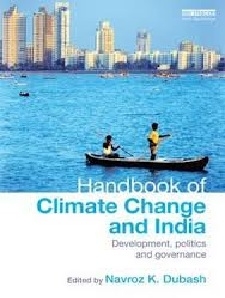 Climate change as a political issue has usually been on the backburner in India, coming forth for intense public discussion only around the time when Indian representatives are off to attend yet another round of negotiations. It is often viewed as an elitist issue, a sort of indulgence for policy makers or academics, with little relevance to real life. The imperceptible jargon, statistics or scientific terminology (which must willy-nilly be used) further serves to mystify the issue, with knowledge becoming an exclusive domain of the epistemic community. The Handbook of Climate Change and India takes the first serious step towards clarifying the debates surrounding climate change in an accessible manner.

The book is structured in a manner that gives fair weightage to a variety of perspectives—scientific, historical, legal, economic and political—bringing coherence to the issue when read in continuation. The idea is not to privilege any particular perspective, but to ensure that they work together to create an interdisciplinary body of work that enhances the general reader’s grasp on the matter.