Causes and Fallouts of Violence 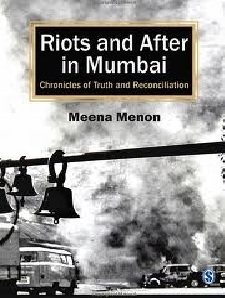 Causes and Fallouts of Violence
Mahtab Alam
RIOTS AND AFTER IN MUMBAI: CHRONICLES OF TRUTH AND RECONCILIATION by Meena Menon Sage Publications, 2013, 267 pp., 595
February 2013, volume 37, No 2-3

Last year marked twenty years of the demolition of Babri Masjid, followed by a series of large-scale communal violence, clashes and riots in different parts of India, especially in the Bombay then and now Mumbai. The year also witnessed Bal Thackeray, founder of the Shiv Sena and one of the key figures involved in the politics of hate and bigotry for more than four decades, die a natural death, leaving the city once again in fear (created by his followers) for a few days. However, what started in December 1992 continued till January 1993. Not only that, while people were still trying to recover from the after effects of the violence, on 12th March 1993, a series of bomb blasts rocked the city and led to comparisons between the two acts of violence unleashed by two ‘opposite’ communities, often ignoring the differentiation between the acts of the individual and that of the community. What is important to note here is that the violence of December 92-January 93 in Mumbai was the worst among all those that had occurred in the city, ever since the first recorded communal violence in the year of 1893. Officially (according to the Justice Srikrishna Commission Report) 900 people were killed in mob violence and firing by the police, 2,036 injured and thousands displaced from their homes, taking shelter in temporary relief camps that were mostly run by NGOs and individuals.