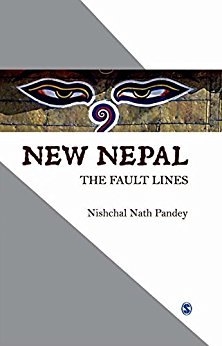 Journalists write the first draft of history, policy analysts prescriptive analysis and scholars give historical context, meaning and analytical coherence to the contemporary rush of events. Rush at all three in a ‘quickie’, and more likely than not you will flounder, as does Nischal Nath Pandey. This book sidesteps the challenge of capturing the socio-political context of the tumultuous transformation of Nepal’s socio-political society and polity, and focuses on the widening ‘faultlines’ that have resulted. These faultlines of region, ethnicity, language and religion are now threatening to pull under the restructuring of a new Nepal and indeed the peace process. Pandey critically examines the contradictory capitulations of weak transitional governments, including the Maoists’ led government, chastizing them for the raft of ad hoc ‘interim’ constitutional amendments especially on federalism and secularism.

Alongside he turns to the looming overhang of the unfinished peace agenda, in particular the issue of security sector reform, i.e., the commitment to integrate the Maoist army and the reform of the (ex-Royal) Nepal army. Its corollary is the unresolved historic tussle over civilian control of the military which has undermined Nepal’s two earlier experiments in democracy and felled the Maoist government in 2009. Pandey also foregrounds the other actors in Nepal’s peace process, the United Nations Mission to Nepal (UNMIN) and its neighbours India and China. Curiously, the faultline that Pandey skirts around is that of class, and its entrenchment in land which represents livelihood, property and status. According to Maoist CA Member Hari Rokka, whose academic work is on political economy of agriculture, some 45% of peasants have 0.4 hectares of land and 20% have no land. 44% of dalits are landless. In the ethnic Limbu community 68% are below the poverty line and most do not have land. But Pandey’s essay on ‘Rejuvenating the Economy’ is framed to exclude engaging with the contentious issue of land reform that intersects with social exclusion. Mahendra Lawoti, in his scholarly writings on institutionalized exclusion in Nepal, argues that it was the root cause of the Maoist conflict. Significantly, post ‘People’s War’ there is a tendency among scholars to focus on ethnicity as a surrogate for class.