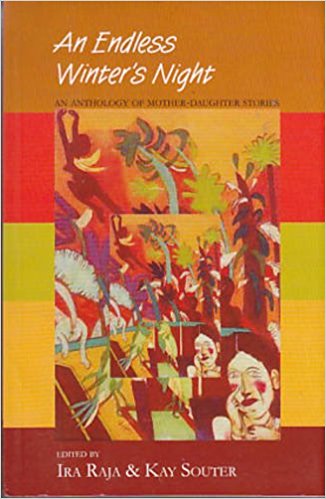 An Endless Winter’s Night presents 19 commendably translated contemporary short stories (and two poems)—all of equal literary merit—written in various Indian languages over the last two decades. The editors explain, in a rather academically—dense introduction, that the common thematic denominator is the complex interstices of the mother-daughter relationship. As they rightly point out, such accounts have traditionally ‘hovered on the textual margins’ of mainstream writing (p. xii). The title of the collection is derived from a Rajasthani proverb, cited as an epigraph to the introduction by Ira Raja and Kay Souter: Mother-daughter conversation, an endless winter night.’ Raja and Souter explicate how this proverb suggests the range of mother-daughter relationships. On the one hand, there is a sense of connectivity in terms of prolonged conversation (‘endless conversation’), while on the other hand, there is a suggestion of the dark and the furtive (‘night’). The editors invite us to be witness to these exchanges, at times intimate but mostly troubled and problematic.

The larger number of narratives is presented from the perspective of daughters who recount their tender/bitter relationship with their mothers at different stages of their lives, ranging from childhood innocence to puberty, and marriage to child rearing. In ‘Miriam’ (Esther David) a Jewish daughter replies to a letter she has received from her mother after many, many years. They had both lived in Israel but after her marriage to a Muslim, the daughter sacrificed her Israeli passport for Pakistani nationality.