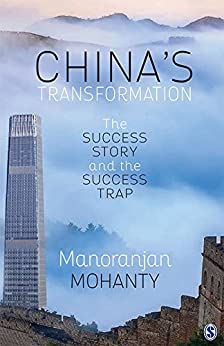 There is a veritable cottage industry that has grown up around books about China’s amazing economic transformation over the last four decades. An even more popular sub-genre is increasingly evident: the story of how China’s rise is poised to presage its downfall, with the latter being described in a variety of creative ways. But if, from amongst this confusing welter you had to pick just one book to read on a desert island (or more realistically, during a Covid lock-down) that would give you an authoritative as well as readable account of China’s rise and current predicament, it is this book. The reasons will be clear later in this review, but first, let us consider the crux of Professor Mohanty’s argument.

The introductory chapter presents the case that Manoranjan Mohanty sets out to prove in the book. That goes as follows: China’s transformation into a modern industrial society started with Deng Xiaoping’s policies of ‘reform and opening up’ in 1979. As these policies were implemented, economic growth started accelerating; as the plans evolved and changed with increasing contact with the outside (capitalist) world, so did the range and impact of the resulting economic and social changes. Gradually, interest groups started forming, power balances (within and outside the Party) shifted and the character of transformation began to shed its socialist origins. The consequences: regional and income inequalities, environmental degradation and ‘democratic centralism’ with increased Party control and less responsiveness to public sentiment. To use a medical analogy, Mohanty’s hypothesis is that the very ‘diet’ prescribed by the reforms produced biochemical changes in China’s body politic, with the symptoms being described graphically by Wen Jiabao (in March 2007) as ‘… growth (that) is unstable, unbalanced, uncoordinated, and unsustainable’.