Charting the Depths of Change 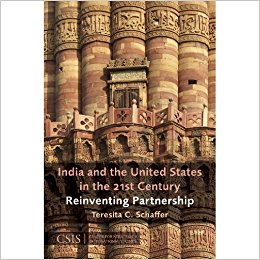 Charting the Depths of Change
David M. Malone
INDIA AND THE UNITED STATES IN THE 21ST CENTURY: REINVENTING PARTNERSHIP by Teresita C. Schaffer Center for Strategic and International Studies, 2009, 254 pp., price not stated
October 2009, volume 33, No 10

Teresita Schaffer, long one of the foremost India watchers in the United States, and one with a distinguished diplomatic career—including much involvement in South Asia—behind her, displays impeccable timing in publishing this volume as the dust (largely) settles on the protracted negotiations surrounding the US-India nuclear cooperation agreement, which finally came to fruition in 2008. Ambassador Schaffer, a much admired figure on the Washington scene, has directed the South Asia Program of the Center for Strategic and International Studies (CSIS) in Washington since 1998. CSIS is one of the few Think-Tanks in the USA that can plausibly claim to be equally open to views and people from both of the country’s major parties and in which both parties feel at home. Many in Delhi will remember Teresita Schaffer from a highly successful posting in New Delhi some years ago. Her diplomatic career culminated in a term as US Ambassador to Sri Lanka in the mid-1990s, after which she served as Director of the highly regarded Foreign Service Institute.

Completely eschewing the often stupefying jargon of the academic discipline of International Relations, and also leaving aside the frequently more useful theoretical debates of that discipline, she couches her analysis and propositions in clear, declarative sentences that could serve as a model of high quality writing for the busy reader.

As she should, Schaffer, takes the long view. She is well aware of, and in various chapters of the book touches on, a number of (mostly unhappy) past episodes in the relationship. But the book does not take a historical approach. Rather, the history of the relationship is the context against which contemporary interests, views and values of the two countries are analysed in remarkably dispassionate terms. The chapters of the book revolve either around a leading topic in the relationship (e.g. energy) or around the engagement by each of the USA and, particularly, India with international partners such as those in the Middle East and East Asia. She is respectful of India’s need for other important partners besides the United States and is sympathetic to its difficulties with some of them (China). But she believes, as most international observers do, that India could do more to help Pakistan navigate away from the very perilous waters into which both self-absorbed military and feckless civilian leaders have sailed it. India’s controlled response to the Mumbai bombings of November 2008 suggests a concerted effort by Delhi not to over-react to provocations flowing from Pakistan intended to elicit counter-strikes that could only weaken and distract the Pakistani government. The recent meeting between the Prime Ministers of India and Pakistan at Sharm el Sheikh, however much decried by many in India, also suggests a very deliberate attempt by India to nurture a relationship as positive as conditions in Pakistan and politics in India allow.