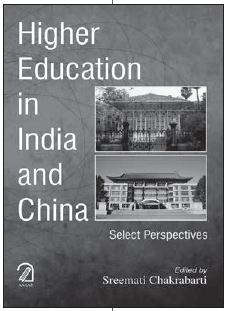 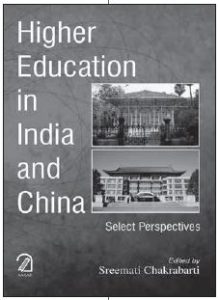 Higher Education in India and China is a collection of scholarly contributions by leading researchers and academia from the University of Delhi and the University of Hong Kong and Macao. Each of the contributions provide a rich understanding about the development of education in India and China in the last three decades and the impact created in the lives of people by the changing educational scenarios of the respective countries. A perspective building aim is clearly visible as a running thread across the writings of each of the authors. They have used both amalgamation and comparison as their tools of analysis to articulate their views on education and its impact in the two countries, with the larger focus centering on how to improve higher education and its allied consequences of social and economic disparities, imbalances and growing unemployment.

All the eight contributions/chapters use a socio-historical narrative in their attempts to delineate the trajectory of development, stemming from the colonial impact and the introduction of western style education in pursuit of promoting Christianity. What can clearly be seen is the remarkable similarity of issues in both the countries that include expansion in enrolment, re-defining institutions and administrative structures, exponential expansion of private institutions and the challenge of quality university education.

The chapter on reforms in Chinese higher education and the impact of the revolution in the country in its culture traces the emerging systems of management, funding and employment. The developments in the country are viewed in three phases. Each of these is described as also the consequences of each phase. The highlight of the chapter is on the new emerging era of education with focus on the forces of marketization and internationalization.

Kavita Sharma’s paper provides an insight into impact of globalization and privatization in both the countries. It discusses at length, issues affecting private universities in these two countries. The contradictions which have resulted from the fast-growing private higher education sector in China in India are flagged and analysed––likewise the tensions between the private and government universities. The primary strand of reasoning is that the Central and State governments are unable to find adequate resources for expanding the higher education sector. As a result, they are creating a fertile ground for the setting up of private higher educational institutions. The chapter highlights the dichotomy about the government inadvertently in some cases and more visibly in some, promoting higher education in the private sector and at the same time enforcing regulations to monitor the sector. The need for a clear-cut policy appears to be paramount.

The chapter on the issue of privatization of the Indian education sector centres the discussion on mushrooming of the private sector and market-oriented approach towards tertiary education. It brings to the fore the changes introduced in India after The Punnaya Committee Report on financing of the higher education sector, highlighting the need to review and restructure the norms of financing. The much-debated Birla-Ambani Report also finds articulation in terms of the patronage given to privatization. The authors discuss some of the attempts by the Government to boost private higher education using the Eleventh and the Twelfth Five-Year Plan documents as well as those of the National Knowledge Commission and the University Grants Commission, to take the discussion further.
‘Higher Education in India and China: Game Changer or Opportunity Lost’ by G Balachandiran flags an important perspective with futuristic leanings. The text looks at the pivotal role that higher education can play in both India and China under the current trends which promote globalization. It talks about a shift from knowledge consumption to knowledge generation in both the countries, as part of a globalized economy. Balachandiran highlights that the foundation of a knowledge society rests on both advanced research and the nature and quality of higher education that it offers. Chinese education in this regard has been pushed to meet world standards in education. One notices a phenomenal rise not only in the number of student and faculty exchanges, but also in the introduction of new courses, new areas of research and so forth. What surfaces is that in China, the aims and goals of higher education have a focused direction, whereas in India, although the signs of change are visible, policies are unstable and often do not match the stated intent. There is also no concrete plan for internationalization. The problem is further compounded in India by the pressures and pulls of a democratic polity. After reading the chapter the sense one gets is that the gap between the two countries stems from the economic and developmental differences between them.
The next chapter takes further the effects of the rapid changes brought about in the Chinese education system that were already covered in other earlier chapters. The challenge of incongruence between traditional Chinese culture and the new culture that the educational changes engender has been discussed. The author highlights that pumping resources into universities may lead to diminishing returns since the Chinese culture and practices do not support the kind of growth that is being envisaged. The importance of recognizing the cultural dimension is discussed at length. Western-style universities may appear to be the norm in China today where academic freedom and financial autonomy are taken for granted. Pointing to China’s long unique academic tradition, Yang believes that tradition is in contradiction with the modern university system. Constant tension therefore rises due to this which affects the efficiency of university education.

‘Ethnic Minorities, Integrative Nationalism and Higher Education in Yunnan Province’ by Ritu Agarwal examines the case of the Yunnan Province to see how the state has changed its policy of being ‘assimilative to accommodative’ towards the ethnic minorities. China in recent times has witnessed a series of ethnic clashes between Han and ethnic minorities in different parts of the country. The Chinese Government has formulated many policies emphasizing on inclusion of ethnic minorities without any concrete results. The state has tried to integrate the minorities by making them adopt the mainstream culture and education but at the same time has kept their ethnic differences and identity intact, according it full respect. This process of recognition of cultural identities has helped the state in legitimizing its presence in Yunnan which is home to more than a dozen minority nationalities in China.

The final chapter, ‘Sweden’s Contribution to Human Rights Education in China and the Raoul Wallenberg Institute’ by Anamika based in Sweden was to initiate a two-year master’s programme in Beijing University. The Chinese government was already trying to raise awareness about human rights in China. The challenge, however, was whether it would help in the emergence of a human rights culture which could be an important foundation for Chinese society. However, a detailed study unravelled that the course structure was mainly focused on the legal aspects of international human rights and did not give opportunity to students to connect international human rights with the social, cultural and local realities that existed in China. The programme had a limited reach and outcome. However, despite this, the RWI’s role in China is immensely significant as it helped China to create friendly terms with other countries and economies.
I would recommend wide reading and discussion of the readable and enriching book among all academic communities since the scope to learn and build perspective is enormous.

D Parimala is Associate Professor in the Department of Education, University of Delhi, Delhi.