Challenges to Integrity and Existence 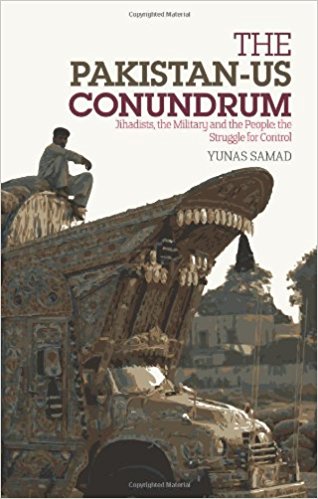 Challenges to Integrity and Existence
Tahir Kamran
THE PAKISTAN-US CONUNDRUM-JIHADISTS,THE MILITARY AND THE PEOPLE: THE STRUGGLE FOR CONTROL by Yunas Samad Hurst & Co, London, 2012, 336 pp., price not stated
May 2012, volume 36, No 5

Pakistan has been a subject of scholarly gaze for some time. The unfolding of events in the post 9/11 period has given a peculiar twist to the usual Indo-centric analysis about its role in international affairs, thus bringing into the discourse such actors as the Taliban, Al Qaida and their interface with Pakistani polity. The spatial context of the engagement of big power with Pakistan has shifted from the East (India) to the North West. The tribal region of the North West Frontier Province (renamed as Khyber Pakhtunkhwa) and Afghanistan have moved from the tail end, as Chris Bayly puts it, to the centre stage of recent scholarly analysis on South Asia. Ahmad Rashid and Zahid Hussain have produced excellent narratives on that particular theme. Yunas Samad’s book under review is a valuable addition to the corpus of literature on Pakistan and the challenges posed to its integrity and existence. The book is composed of three sections preceded by an exhaustive introduction, which deals with theoretical underpinnings of the neoconservative ideology and the centrality that Islam holds in its formulation.

Strikingly interesting is the discourse about the relocation of the conflict emanating from socio-economic and political issues to culture which became ‘the primary mode of analysis’ by western policy makers and members of academia. Scholars like Bernard Lewis and subsequently Samuel Huntington pointed to a new paradigm of conflict which they saw emerging in the changing realities of the post-Cold War world. They along with some other scholars of their ilk presaged the clash between the West and Islam. The reasons foregrounded were not historical or political but cultural.Initially coined by Lewis Huntington the expression ‘clash of civilizations’ became a buzz-word among the western literati. That ‘paradigmatic shift’, Samad argues, took effect with the rise of a neoconservative influence on western policy-makers particularly after 9/11. Thus the binary was constituted afresh, with the new ‘Other’, Islam and its adherents substituting for the Soviet Union. Samad therefore aims at dusting off the cobwebs of ambiguity and fuzziness surrounding the constructs like ‘we’ and ‘them’ by resorting to earlier historical and political context. The classification of ‘with us’ and ‘against us’ forced those that were ‘ambivalent’ about such a simplistic categorization into the opposing camp.