CENSORSHIP IN SOUTH ASIA: CULTURAL REGULATION FROM SEDITION TO SEDUCTION 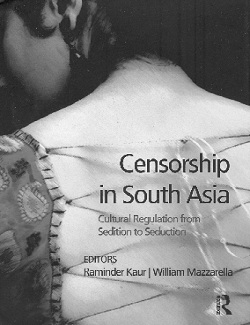 The importance of this book lies in its unpacking the word ‘censorship’, which is commonly understood as the suppression of information, images or any other content, usually by the State or a State institution, on grounds ranging from obscenity to threat to national security. But such a definition, the editors of this volume suggest in their introduction, ’Between Sedition and Seduction: Thinking Censorship in South Asia’, is inadequate for a variety of reasons. For one, censorship according to them, need not only be an act of repression imposed from the outside on the sovereign subject, but could emerge from within that subject itself. For another, censorship can be read not just as a silencing, but ‘as a relentless proliferation of discourses on normative modes of desiring, of acting, of being in the world’. They would also consider the subtle techniques of market forces to influence media subscribers or strategies of social and political activists, like the street rally or gherao, as coming under the rubric of ‘censorship’. For instance, when the Shiv Sena stops the screening of the Deepa Mehta film, Fire, it would, in such a reading, constitute censorship. There is an intriguing intertwining here—of repressive actions that seemingly serve public interest but also serve the interests of publicity—rendering censorship its very opposite.