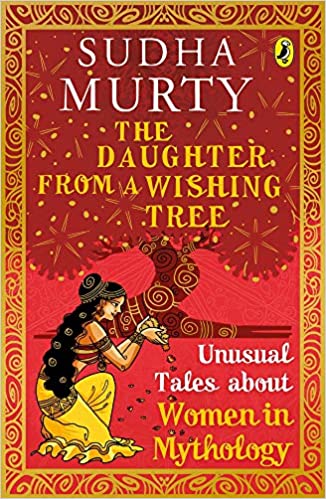 The Daughter from a Wishing Tree is the fourth in a series of books by Sudha Murty on unusual tales from Hindu mythology, this volume is the only one that focuses on women in mythology. Sudha Murty writes in the Preface that she was ‘disappointed and disillusioned’ to find that ‘there is minimal literature that highlights the important roles that women have played.’ This book attempts to fill a large gaping hole in our knowledge and understanding of religion, mythology and society. Women abound in Hindu myths, from the warrior Durga to the fiery Draupadi, from the apsaras such as Urvashi and Menaka in Devlok to Ahalya, Bhamati and Sukanya, wives of great sages and learned men. However, since the stories have been traditionally told from a male perspective, the presence of women has been side-lined, ignored, cast in guilt and shame or described in stereotypes.

Sudha Murty gives us twenty-four tales of amazing women, ambitious, intelligent, assertive, fearless, spiteful, humble, forgetful, dedicated and dutiful women. The stories are written in a simple and direct manner making them easy to read and understand. I particularly loved the story titled ‘Goddess of Fruits and Vegetables’ in which we learn that the compassionate Parvati, described by her husband Shiva as being ‘independent of me in thought and action’ not only kills the demon Durgamasura but rebuilds the agrarian economy which he had destroyed.  What a promising beginning!