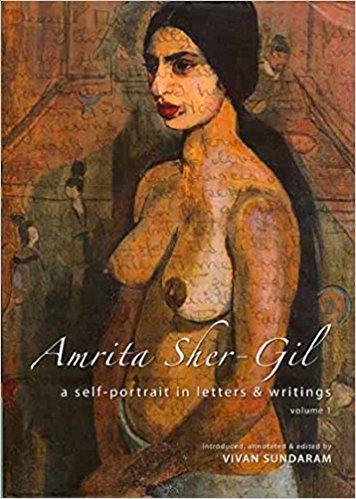 Anything anticipated too long often ends in anti-climax. Not this outstanding and enthralling two volume memorial to Amrita Sher-Gil, India’s most iconic painter—almost twenty years in the making. Dying tragically young at the age of 28, Amrita left behind not only an incomparable body of work, but a cache of 260 letters and writings that illuminate her life, art and times. Even were she not a major part of India’s artistic history, one would read the volumes for he sheer pleasure of what Salman Rushdie describes in his Foreword as ‘her impassioned, opinionated voice’, and the glimpses of her wit and devastating insights into the state of Indian art, Indian society and her own mind. Often egotistical, she is never self-deceptive—and always arresting. Viz., her first experience of Kathakali dancing—‘grotesque and subtle at the same time—an unusual combination’.

Vivan Sundaram, Amrita’s nephew, himself a multifaceted artist, has talked about a definitive portrait of Amrita for decades. In the early 90’s it was to be a book of Amrita’s letters brought out by Kali for Women. Then a feature film by Kumar Shahani. Neither fructified. In the interim, Vivan worked with the letters and Amrita’s Umrao Singh photographs. The immediate result was a series of exhibitions of imaginatively juxtaposed photographic collages and audio visuals, gaining him an ease and familiarity with the material that would serve him in good stead when he finally began work on this magnum opus. Amrita Sher-Gil: a Self-portrait in letters & writings, (in 2 volumes) introduced, annotated and edited by Vivan, and beautifully published by Tulika Books, is masterly—the structure, presentation and design, and the rigorously researched, authoritative editorial text, match the quality of the subject and subject matter.

Amrita Sher-Gil died six years before I was born but she was always a part of my life. Her painting, The Story Teller, which my father bought from her first exhibition at Falettis in Lahore, effortlessly dominated the drawing-rooms of 14 different homes around the world as I grew up. Its dark, glowing colours and serene imagery, counterpoised by the luminous whites of the village wall backdrop, were a magical world into which one could disappear. Sadly, incredibly, it was one of the few paintings she sold in her lifetime—apart from the commissioned portraits she despised, and a painting of bullocks and carts which a kind cousin suggested she paint as an advertisement for Dunlop Tyres!

Amrita was a close friend and briefly a lover of my father’s. Her sister Indira, Vivan’s mother, to whom these volumes are dedicated—exquisite and with a fey charm; gifted, yet self-doubting—was one of my mother’s dearest friends till her death. She married Kalyana Sundaram, who was my father’s ICS colleague and closest friend. They sheltered my parents during the partition riots in Delhi, and their home remained our home from home over the decades.

Now one rediscovers Amrita and Indira, and a world that is familiar yet full of surprises. Amrita and my father met and became friends in Simla in the 30’s. For a time they were very close—sharing a love of music, literature, Indian art and aesthetic in an otherwise intensely anglicized world. He was one of the young ICS bachelors with whom her parents used to mix and match make for their two beautiful daughters. Amrita’s father was a Sikh aristocrat; a scholar and philosopher—a white bearded, idiosyncratic, consciously Tolstoyean figure in dark, homespun robes. His passion for photography created an extraordinary pictorial record of the family—one of the major sources Vivan has drawn on to illustrate the Amrita volumes. Her mother was Hungarian, part Jewish—red-haired, blowzily attractive; loud, warm-hearted, and something of a social snob. Over the years she became increasingly eccentric and demanding. She was a fine musician whom Umrao Singh Majithia had met in London when she was companion to Princess Bamba, Ranjit Singh’s granddaughter. Though she passed on her musical talents to both her daughters, she was not sensitive to the deeper meanings of Amrita’s extraordinary art. One of the tragedies of Amrita’s life was that though many responded strongly to her as a person, only a handful really understood and responded to her painting. And of course, no one realized how short her career would be. A family anecdote is the story of a well-known English art critic who, on hearing that my father had bought one of her paintings, commented, ‘You don’t buy paintings from young women in their 20s, you dance with and make love to them’! Luckily, she herself was never insecure about her work. She knew she was better than all her peers and the critics.

Amrita, in turn, dismissed Simla society as ‘a dull, uninteresting and scandal-mongering crowd’. Their pretensions and shallowness irritated her and she shocked them. It was a world that prided itself on its cosmopolitan culture and sophistication but was very much dominated by the social conventions of the time. Painting was a nice hobby for a young girl but one shouldn’t get too intense about it. Men were expected to be virile and women to be chaste and, if occasionally the women, perforce, had to be a little less than chaste in order to prove the men virile, the liaison was conducted with utmost discretion. Discretion, deceit of any kind, was anathema to Amrita. She was utterly open. Into this carefully ordered world of pearls, puffed sleeves and pale, pastel chiffons, her flaming red, parrot green and gold brocades, chunky Tibetan jewellery and sleeveless blouses were an outward manifestation of the explosive force of a new kind of painting, a new kind of woman, and a new kind of living.

She had come back from Paris aged 21, determined to make her home in India ‘feeling’, as she said, ‘in some strange, inexplicable way that there lay my destiny as a painter’. She knew instinctively that it was in painting India, ‘desolate, yet strangely beautiful,’ and Indians, ‘Those silent images of infinite compassion and patience,’ those ‘angular brown bodies, strangely beautiful in their ugliness’, that she would fully realize her own unique artistic vision.

Apart from an Associateship of the Grand Salon, a Gold Medal, and considerable reputation as a painter, Amrita’s European experience had included numerous lovers, abortions, venereal disease, an experiment with lesbianism, many deep friendships and influences, and an engagement to her cousin, Victor Egan. Her extraordinary relationship with him; its total honesty and security (she told him everything and he knew everything about her; he arranged her abortions and she married him while possibly pregnant by another man) gave her great strength as she fought the artistic and social prejudices of Indian society as well as the conflicts within herself.

Amrita was a sybarite who loved music, good food, bridge, ballroom dancing, beautiful clothes, but she worked with a fierce intensity and a conviction of her own genius. In pursuit of her art she was ruthless, putting up with second-rate painters like Barada Ukil, who loved her but was all she despised, because he promised to promote and sell her work. She longed for ‘a life of sensation’ and, while never consciously trying herself to be sensational, her determination to seize every experience—visual, physical, emotional and intellectual—and her frankness and passion for truth inevitably created it. She would be unusual even in the India of today.

Her friend and later biographer, the broadcaster Iqbal Singh, told a characteristic story of an extreme example of both these traits: she unhesitatingly accepted the embraces of an unknown German who leapt in at her window while she lay by the fire one evening, but then rejected further acquaintance on meeting him later, because she found him a bore!The English writer Malcolm Muggeridge, a supposedly iconoclastic, unconventional intellectual, found her bewilderingly her own woman, and was alternately attracted and repelled. She enchanted him but also drove him mad; he seems to have found the sensation uncomfortable. My father too, (like most Indian men then and now!), could not bear being one of many. That she could, travel and live with, and use people like Barada Ukil whom she describes as ‘loathsome’ and a ‘wretched chap’, or Iqbal Singh, that ‘pathetic little Sikh with feminine voice’, upset him, and was one of the paradoxes of a person who was at the same time so fiercely and remorselessly honest—with herself and her dearest and closest.

All previous writing on Amrita and her art has tantalized, inspired, raised questions, enthralled, exasperated—while conveying only a pale shadow of her brilliant, many faceted self. These two volumes encompass all dimensions, and are deeply, deeply satisfying. There is sadness, delight, and gratitude.

And surprises! An aspect which may astonish those who only know the superficial Amrita legend is this passionate, hedonistic artist was also a deeply practical person. It was she who gave her difficult, often dysfunctional family most of its direction and support. Her letters document her discipline, hardheadedness regarding money, the long meticulous lists and care with which she budgeted and planned her expenditure, travels, and homes… The careful preparation and drawing that went into each major work. The painstaking networking and PR that achieved her few exhibitions and commissions. The grit and humour with which this sophisticated aesthete bore the loneliness of being newly married to an absentee doctor, stranded in rural Punjab without intellectual or cultural stimuli.

It proved her marriage to her cousin was not out of convenience or an escape, but one of mutual love and interdependence that worked despite their very different temperaments and interests and his disinterest in her painting. One of the most touching, tragic things into the book is the letter which she writes to Victor, well on into their married life in Saraya, saying she had never realized that he actively disliked her painting; she had previously only thought he was indifferent to it.

I was also stunned by how many paintings she had done. 171 paintings in a space of just 10 years—a huge body of work of extraordinary range and quality. To see reproductions of all these, many unknown to me, in full colour—plus thumbnails in chronologicalrder, is one of the joys of these volumes. And what an appetite for and understanding of colour she had! ‘I’m always hungry for colour’; she used to say, quoting Van Gogh. ‘I want to express, with greens and with reds, the terrific, the terrific, human passions.’

It is important, though sometimes difficult, seeing the assured maturity of her paintings, to remember how very, very young she was. A consummate artist with her own distinctive vision while still a young girl in her teens and twenties; painting these amazing canvases while worrying about facial hair and the importance of the right shade of face powder, coping alone abroad with emotional angst, sexual disease, being broke, and the approaching war. Recycling her old clothes while longing to buy new ones—(a ‘divine’ pure gold Banarsi sari for 600 rupees—‘how much more beautiful Indian materials are than the European ones)’, suffering sibling rivalries and getting bugged with her mother, succumbing to the beauty and glamour of an about to be arrested Jawaharlal Nehru, poring over photographs of herself, swopping cake recipes and girly gossip. Discovering the multiple, complex layers of India and herself
. . . And revealing both to us in the process.

It is these minutiae and insights as well as the larger aesthetic and existential issues of her life and work, illustrated in alternate pages by the paintings and photographs, that make Vivan’s two volumes such a rite of passage. A revelation of someone one thought one knew, and that one re-discovered all over again. A portrait of a person that is also a portrait of an era. One owes Vivan and Tulika much gratitude. A labour of love has been executed with both passion and meticulous, imaginative precision. And, since Amrita prized love and was prodigal of it herself, she would have rejoiced and celebrated it.