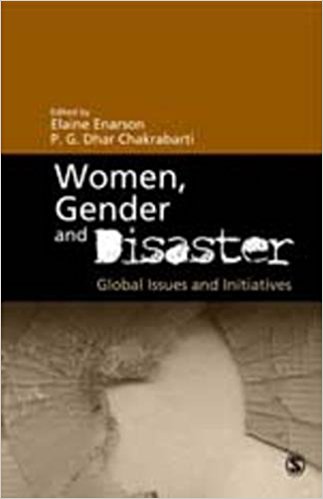 Women grieving publicly is the common image of disaster. But this is just the tip of the iceberg. Women suffer disaster un-equally. More women are victims than men of disasters—both natural and manmade. Women get less rehabilitation. Women have less voice in expressing their distress. Women work as hard to overcome disaster but they have little role in decision making during and in rebuilding after disasters. This is what this edited book is about. The book is the outcome of the effort of the UN International Strategy for Disaster Reduction (UNISDR) in order to encourage governments and civil society and local authorities to use the experiences recounted in this book to make disaster risk reduction movement more effective for women and men.

It is based on essays by feminist analysis of women’s and men’s role with a gender perspective during various disasters from world over. This book covers many of the recent disasters worldwide from the tsunami of South and South East Asia, the Himalayan earthquake that affected both sides of the Kashmir border, floods in New Zealand, hurricane disasters and biological and climate change disasters.The first part of the book attempts to create a gender framework for understanding different roles during disasters.