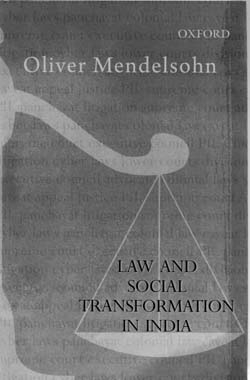 Law and Social Transformation in India is a compilation of Mendelsohn’s publi-shed essays on the Indian legal system written over different points of time. These essays offer us important insights into how sociology of law emerged in India while archiving the transformation of the judiciary since early Independence. The book opens with an early but important essay, ‘The Pathology of the Indian Legal System’ (1981). This essay offers a powerful challenge to the colonial view, often repeated in the discourse on judicial reform today that Indians are litigious who overuse (or misuse) courts. Moving away from such viewpoints, Mendelsohn argues that agricultural land became the object of litigation during colonial rule and the early years of Independence. The regimes of taxation and administration of law produced an overwhelming amount of land litigation. Although after the 1820s, following the enactment of a series of laws, ‘land was made newly vulnerable to moneylenders’ (p. 22). The rent suit became the most common form of lawsuit in colonial courts. Rather than a calculated colonial policy to push land relationships in a specific direction, the consequence of the decision to prepare a ‘record of rights’ or a ‘register of titles of all the land in a region’ resulted in an explosion of land cases. This form of colonial governmentality led to a number of disputes where a ‘challenge to the record of rights was renewed with every fresh settlement’ (p. 25).