Bringing ‘Class’ Back Into The Debate 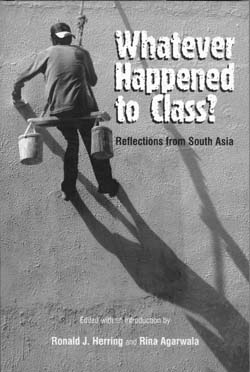 Bringing ‘Class’ Back Into The Debate
Susan Visvanathan
WHATEVER HAPPENED TO CLASS?: REFLECTIONS FROM SOUTH ASIA by Ronald J. Herring and Rina Agarwala Daanish Books, 2009, 216 pp., 295
August 2009, volume 33, No 8/9

This collection of essays has a sense of polemic, since the writers are keen to bring the analyses of class as a category back into the sociological debate. It never went away in India, so the ‘reflections from South Asia,’ actually names departments in UK and USA where ghettoized communities of academics with interest in South East Asia, find that other colleagues there are not interested in what they are doing, so then they fall into a fine rage, and set out rules and interdictions regarding what the content of the discipline of sociology must entail. Their first named enemy is Cultural Studies, and more minutely Poststructuralism, Postmodernism, and Postcolonialism. That is a huge battleground! The real content of the book is however interesting in itself. The Introduction is clumsy, with Herring and Agarwala actually having some implicit differences in their location about capitalism and working class interests. Vijay Chibber continues this in his essay about hierarchies in academics, where Third World scholars are now welcomed into First World universities, and what does this mean in terms of class analyses within the profession?
There are some nuances in Chibber’s work that I would find problematic, but then everyone is allowed to have an opinion about what is ‘quality’ in academics. It is a case of they do not read us, and we have never heard of them. See for instance, Chibber’s comment:

JNU became an extraordinary space for critical analyses in the two decades that followed; and even the official state discourse of egalitarianism, despite its obvious ideological functions, sustained an attention to class issues. But this tilt within the state could only create the space for radical analysis. It could not determine scholarly quality or vitality. (p. 43)

Since the author has not done a survey of courses taught, or dissertations written on class from the School of Social Science, JNU, it seems an unnecessary comment.