Bringing a Region into the Fold 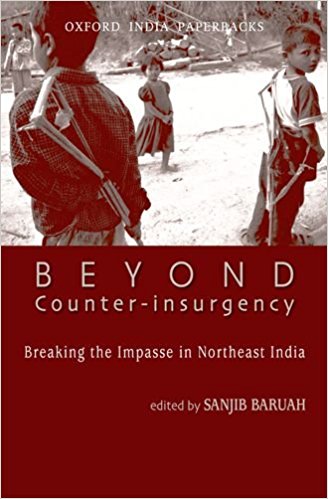 Bringing a Region into the Fold
Devyani Srivastava
BEYOND COUNTER-INSURGENCY: BREAKING THE IMPASSE IN NORTHEAST INDIA by Sanjib Baruah Oxford University Press, 2009, 283 pp., 825
August 2009, volume 33, No 8/9

The Northeast has come to occupy a pivotal position in India’s foreign policy as a future ‘gateway to Asia’; yet despite a policy reorientation towards the Northeast, the region continues to suffer from festering low intensity armed conflict. Addressing and understanding this incompatibility is the motivation of Sanjib Baruah’s (Professor of Political Studies, Bard College, New York) latest publication that brings together fifteen diverse essays from historical, sociological and political backgrounds. Much like his earlier writings (Durable Disorder: Understanding the Politics of Northeast India, OUP, 2005 and India Against Itself: Assam and the Politics of Nationality, OUP, 2001), the book is premised on the fact that the crudely developmentalist and the national security-centric mindset is unlikely to bring peace in Northeast India.

While his earlier writings offered a Northeastern vision of itself as a focal point rather than a distant borderland, this book provides a nuanced understanding of violence and terrorism with a view to dispel simplistic readings of the conflicts. Issues such as the reaction of society to violence, processes of integration and exclusion, construction of authentic narratives are aspects dealt with well in the book that together, along with the limitations of the dominant security-centric and development-fix approaches, offer critical lessons for counter-insurgency in order to push it beyond the imperatives of conflict management.

In understanding the resilience of armed conflicts in the Northeast, three levels of analysis dominate the book. One, a historical perspective to the region’s contemporary predicament has been provided through an exploration of subtle albeit compelling linkages between colonial knowledge and postcolonial practices. Traces of the colonial probematique reflected in instances of drawing the Inner Line (a line that sought to demarcate wider territorial possessions of the British and its constricted jurisdictional limits) and the posa (an annual payment made by the British to the neighbouring hill tribes) can be found in postcolonial practices, particularly the Armed Forces Special Powers Act (AFSPA) and the Look East Policy. By granting additional powers to the security forces and suspending human rights, the AFSPA allows the existence of a ‘permanent regime of exception’ to the law that is supposed to be the default all across the Indian union. Just like the Inner Line created a territorial exterior to the theatre of capital, a pre-capital area where the law did not apply, the AFSPA too creates an entirely separate space within India that functions as a military state rather than an electoral democracy. The Look East Policy too is laden with the colonial practice of ‘buying peace from the peace brokers’ evident in the practice of posa.Such a perspective is useful in not only pointing out the gross inadequacies and failure of democratic nation-building in India but also in providing a constructive framework to push for fresh thinking on the conflicts in the region.