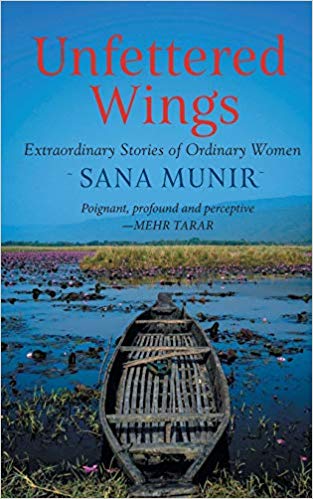 One of the first thoughts that occur after going through the stories in the book under review is how similar are the stories of women situated in India and Pakistan. Popular notions in India look at a Pakistani woman’s image as a burqa-clad creature whose life is controlled by the men in her life. Further, Pakistani society is drawn as a cage in this imagery where women’s lives are ruled by the tenets of Islam. She is imagined as a woman without any agency. Modernity is considered to have touched her in a limited sense while matters of life choices are not considered to be her cup of tea.

Through Unfettered Wings Sana Munir, a storyteller from Pakistan, introduces us to ten Pakistani women located in different spatial, temporal, social and economic contexts.Unfettered Wings promises to tell us extraordinary tales of ordinary women. In its own way, the stories break the popular notions about Pakistani society and most importantly, the lack of agency of women.

Set in the year 1947, the first story revolves around a little girl named Farida and how she understood and analysed the traumatic events following the Partition of India which resulted in not only a new country called Pakistan but also in human tragedy incomparable in history of the modern world. Young Farida was trying to make sense of the intense discussions going on within the family subsequent to which she had to witness her father’s murder in their own field. As she gains consciousness and returns home, she finds her other family members including her mother and younger siblings being murdered by her own grandfather to protect the honour of the household. The story looks at the traumatic experiences that Partition unfolded through a child’s eyes.