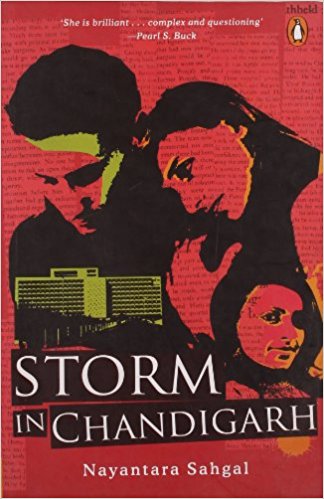 Nayantara Sahgal, a prolific writer, has ben awarded the Sahitya Academy Award and the Commonwealth Writers’ Prize for other works of fiction. Two books have recently been reissued by Penguin—Storm in Chandigarh and A Situation in Delhi. These works are average, definitely not representative of the best writings of the author, nor do they represent the finer writing of English in India. The Storm in Chandigarh is about the political manoeuvrings of the Chief Ministers of Punjab and Haryana. The Home Minister in Delhi sends his best trouble shooter as his personal representative to the states to assess the situation and take effective action. The mind boggles at such naivete. For spice, there is the sub-plot of two couples living in Chandigarh, at odds with one another and between themselves. Of course, it all unravels in the end.

The Situation in Delhi is about the death of Shivraj and the ideals and values that he lived for are dead too. The party, and with it, the government has been hijacked by his successors for petty and short-sighted ends. Devi, the daughter of Shivraj, is presently the Education Minister. With the assistance of the Vice-Chancellor of Delhi University, Usman Ali, she must contain this slippage into decay. Her son, Rishad, is lost in the maelstrom of violence. With just that faint tang of fact his story loses itself in confusion and quandary towards the end.

The present reader will shrug off these stories as that of bygone period when bureaucrats ruled the roost and politics and the civil services were at the zenith of achievement. On second thoughts, one may wonder whether such times really existed, when plots were simple and political tangles had such ready-made solutions.