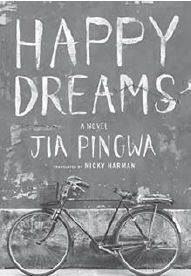 In an idealistic world, there might come a day when geographical borders are reduced to lines on a map. But would the borders we learn to draw around ourselves ever be erased? Would identities be separated from occupation and ethnicity to disable differences in privilege? Similar to Victor Hugo’s Les Misérables, Happy Dreams by Jia Pingwa voices stories of the outcast sections of society in the 21st century.

Hawa Liu, a rural peasant, moves to Xi’an motivated by the intent to make it big and never return to his homeland. He changes his name to ‘Happy’ Liu to cope with the helplessness caused by his failure to identify with his ethnicity, status and his hopes of achieving contentment. We follow his life, and that of his friend and loyal side-kick, Wufu, whose death marks the opening and the ending of the book.

In the very first chapter, Happy advocates that his witty nature, cheerful personality, and ability to appreciate the finer things in life, make him unique and merit a superior destiny. He justifies this belief with his arithmetic and conversational skills, the structure of his face and his taste in women. He believes that he must be considered an inhabitant of the city since he sold his kidney to a city dweller!