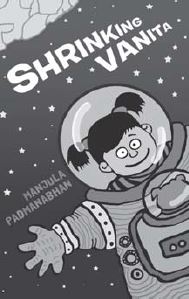 Vanita is a unique child. Early on her parents realized she was different from the other kids. Whenever she encountered anyone or any animal shorter than herself, she shrunk to half their size. Unable to understand her condition, the doctors put it down to an anomaly, a misfortune that Vanita must learn to live with. But Vanita sees her ability to shrink at the drop of a hat as a strength rather than a disadvantage. She uses all manner of practical thinking, with a measure of whimsy and most importantly her ability to change her size and the size of anything connected to her, to save the Earth from colliding with an asteroid. Vanita willingly goes where no one has dared to go before—into outer space, into the path of a gigantic rock of iron. She is indeed an inspiration since, convinced that she is the only one who can save the world, she is willing to sacrifice her own life in order to save everyone else.

Manjula Padmanabhan writes a fantastical page turner that any young reader would enjoy. The gripping story is accompanied by illustrations that help emphasize its more comical aspects. Though the story could be considered science fiction the language used is simple, contemporary and accessible. However, Shrinking Vanita would also engage older readers with its subtle yet scathing indictments of figures of authority and how they react in the face of crisis. For instance, news channels begin to make false statements in their attempts to ward off fear about the asteroid crash. Newsreaders are changed frequently to keep them from letting down their guard and telling all. At one point, a newsreader appears on Vanita’s television screen and reveals that she has been tranquilized to keep her from telling the truth. Also, the news channels seem to be deviating from the issue at hand—the mass of rock flying earthwards—to dwell on more trivial topics so as to keep their viewers in the dark.