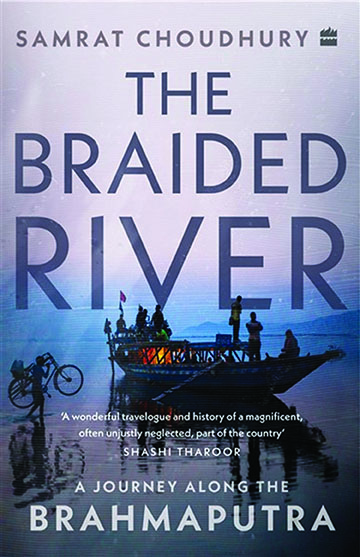 Blending Travel, Memoir and History
Parvin Sultana
THE BRAIDED RIVER: A JOURNEY ALONG THE BRAHMAPUTRA by Samrat Choudhury HarperCollins, 2021, 409 pp., 599.00
September 2021, volume 45, No 9

The Braided River is an ambitious project, an account of the journey that the journalist took tracing the river Brahmaputra from its Indian origin in Arunachal to Bangladesh where it takes a new name and merges with the Ganga.

Divided into three broad sections, the book gives a detailed account of not only the route that the longest river of India follows, but also the lives it makes and breaks. The first part largely deals with the river’s origin in India in the State of Arunachal Pradesh. Choudhury starts with mythical accounts of the river along with archaeological facts about it. Such myths cut across countries and religions indicating the significance of the river.

The journey starts as the author starts to trace the origin of the river—mainly tracing the origin of its three main tributaries namely Dibang, Siang and Lohit. The very beginning shows the many administrative obstacles that the region suffers from. People from outside Arunachal Pradesh require an Inner Line Permit and acquiring it puts one through a tedious bureaucratic process. After much hassle, the author and his friend could acquire the required permit which is given for a limited period of time.

In Arunachal Pradesh, we get a glimpse of a border State with scant population and isolated villages. Owing to its strategic importance, the State has both intelligence bureau officials and a substantial number of Border security and Army personnel. So much so, that the author is stopped from visiting villages closer to the border region. Choudhury’s experience sounds nothing less than unnecessary heckling.

In this part, Choudhury delves into the problem of big dams. The entire project of making the North-eastern region the ‘powerhouse’ of the country has faced adequate criticism. The big dams which are in the pipeline will seriously impact the ecology of the region. In his conversation with locals, the author touches upon the increasing influence of the Bharatiya Janata Party (BJP) and RSS trying to co-opt the indigenous tribals and how indigenous tribals have not exactly warmed up to the idea.

The next part of the book deals with the author’s travels in Upper Assam. In Dibrugarh, Choudhury touches upon the presence of illegal timber smuggling and how often the river is used to transport them. The economy and the politics of the Brahmaputra becomes evident. As the author moves through the towns of Upper Assam, Dibrugarh, Jorhat and Sivsagar, he elaborates the history of the Ahoms. In lucid language and borrowing from Gait’s work he talks about the entry of the Ahom rulers, their rule and their military conflicts with the Mughals. He also talks about the changing demography which has been a concern of indigenous tribes.

Choudhury’s stay in a tea garden shows the remnants of the colonial era tea venture and the author further delves into the continued feudal nature of the tea industry. While travelling through these districts, he also takes up a very important issue—the problem of insurgency which has rocked the region for decades. He elaborates the history of United Liberation Front of Assam (ULFA), the extortionist policies of the outfit, the killing of activist Sanjoy Ghosh which robbed the outfit of much support. In this account we also get a glimpse of the history of the infamous secret killings that were carried out in the State, the nexus between insurgent outfits and political power and the illegal syndicates that tend to be carried out despite being in the know of the administration because of its monetary benefits.

The author also visits the popular river island and the centre of a Vaishnavite sect—Majuli. Again highlighting environmental issues like river erosion, Choudhury talks about the concerns of the local people regarding the government policy to make Majuli more accessible. It seems the fragile balance of the ecosystems will be in jeopardy if a large number of people travel to these places regularly. A similar ecological concern is expressed when the author travelled to Kaziranga National Park and witnessed the problems of poaching and orphaned rhinos, etc.

The next part of the book deals with the author’s travels in the regions of Lower Assam—the districts of Kamrup, Goalpara, Dhubri and ends with the author’s journey to Bangladesh. While travelling to these districts Choudhury again touches upon contentious issues like the National Register of Citizens (NRC) and the Citizenship Amendment Act (CAA). The districts of lower Assam prone to floods and large-scale land erosion witness a regular outmigration, largely of Muslims of East Bengal origin or Miya Muslims. The insider/outsider dichotomy that continues to be the dominant narrative in the region often portrays these Miya Muslims as ‘suspicious individuals’ or ‘doubtful citizens’ who are detained if they fail to prove their citizenship.

The last part of the book which is an account of the journey into the districts of Lower Assam lacks the detailed account that is present in case of the other areas. Choudhury does talk about the different dialects spoken in these areas and the history of the zamindars along with the much-famed Gurudwara of Dhubri which is connected with the arrival of Guru Teg Bahadur. But the accounts are largely limited to tourist destinations.

Travel to areas of geographical peculiarity like the exclave called Bhokdanga which is an Indian territory’s extension into Bangladesh would have presented interesting insights into lives in the border areas. The author would have also got the opportunity to problematize the perception that an unabated immigration is taking place on a daily basis.

The journey to Goalando Port in Bangladesh which is the point of confluence of the Brahmaputra and Ganga is covered in the last two chapters. As the book deals with issues of alleged immigration from Bangladesh, an enquiry on this from the other side of the fence could have given more insights.

The book cuts across genres and is not just a travelogue. The Braided River will familiarize readers from across disciplines to this region which is often denied an adequate and rightful space in the academic sphere.