Climate Change and the Infinite Horizon of History 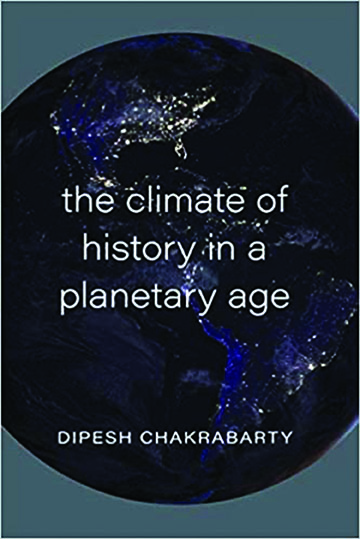 Climate Change and the Infinite Horizon of History
Arvind Elangovan
THE CLIMATE OF HISTORY IN A PLANETARY AGE by Dipesh Chakrabarty Primus Books, 2021, 284 pp., 995.00
September 2021, volume 45, No 9

Climate change is one of the most pressing crises facing humanity today, regardless of geographical boundaries. While the science of the crisis has been proliferating in journals and public forums for several decades now, it is only recently that scholars have begun to pay serious attention to the implications of this crisis for social sciences and humanities. Dipesh Chakrabarty, the renowned historian and author of such influential works as Provincializing Europe: Postcolonial Thought and Historical Difference (Princeton University Press, 2000; 2007) and The Calling of History: Sir Jadunath Sarkar and His Empire of Truth (The University of Chicago Press, 2015), among others, has been at the forefront of thinking about the implications of the climate crisis for humanists. In The Climate of History in a Planetary Age, he collates and expands on some of the accumulated insights on these implications that represent more than a decade of his research and thoughts on these matters.

A quick caveat before we proceed further. Approaching the subject matter eclectically, Chakrabarty’s book is filled with insights drawn from multiple disciplines, both from the sciences and from the social sciences and humanities. As such, this review will focus on one of the important threads that runs through the book, namely, the question of scalar difference and its implication for humanities. Readers would of course greatly benefit from reading the book and drawing out other equally important aspects; the fact that only one strand is highlighted here only testifies to the incredible richness of this text.

In the first three chapters of the book, Chakrabarty lays out some of the theoretical problems in thinking about climate change, especially on the question of scale. He incisively points out the paradoxical scales of history that the crisis of climate change reveals. On the one hand, due to the extraordinary developments related to industrialization and capitalism of the last four hundred years or so, humans have acquired this geophysical force, which seemingly makes the human appear large in a scalar sense. A telling example is when he cites one study that estimated in 2001, ‘human earth moving’ resulted in moving about 57 billion tons per year, whereas the natural process of sedimentation carried by rivers into the ocean were a few billion less than the human effort (p. 7). On the other hand, from the accounts of a longer, deeper history of planets that Earth System Scientists produce, the conclusion is unmistakable that the human is only one form of biological organism that inhabits the planet, among billions of others (p. 78). In this scalar sense, this ‘smallness’ of the human gestures towards a sobering thought, namely that the planet earth was not necessarily made for the human. Citing David Archer, Chakrabarty notes, ‘…there’s no evidence that it [the planet earth] was created especially for us…’ (p. 63). This recognition of the paradoxical scale of the human life–which simultaneously enhances and diminishes the human—as it were, plays an important role in the way we understand and confront the crisis of climate change.

The implications of this paradoxical scalar differentiation for our understanding of human history, specifically modernity, forms the core of the discussion in section two of the book ‘The Difficulty of Being Modern’. Chakrabarty notes that much of our global discussion of modernity and human justice, often found in accounts such as the rise and fall of empires, nature and critique of industrialization, capitalism, nationalism, and decolonization are rooted in a world view that perceives the human at the center of the universe, as it were. However, in writing such histories, scholars have largely overlooked the alternative scale in which the human life as a species unfolded, one in which along with other organisms, the human too evolved from the surrounding environment and in turn, developed attributes of survival in order to inhabit the planet. Interestingly, it is this scalar collision of human life, namely, the simultaneous desire to survive as a species and flourish as a modern human being that has led to the current crises. In other words, it is precisely the pursuit of ‘good life’ in whatever terms we define it that inevitably affects the very condition of life in which the ‘good life’ must unfold. At stake, then, is the foundational promise of modernity, namely, how do we pursue a path of progress when we become aware that this collective project becomes the cause for a collective crisis that we now understand as the crisis of climate change? For, if histories of injustice and justice form the core of much of our conceptual thought and action, as they must, then, equally we must understand that such a pursuit has bio-spherical limits precisely because of this fundamental scalar clash of human existence.

Yet, understanding this differential and paradoxical scalar nature of existence is challenging both conceptually and politically, as Chakrabarty explains in the chapters, ‘Anthropocene Time’ and ‘Toward an Anthropological Clearing’. Often, we find it difficult to grasp the vastness of the geological scale of the planet’s history precisely because we tend to translate them into human, specifically, moral terms. Thus, the term Anthropocene, which referred to ‘the extent of human impact on the planet’ (p. 156), ‘could never be completely separated from moral concerns’ (p. 157). Due to this translation, the debates around the Anthropocene often took the form of locating moral responsibility for the crisis. Among others, this led the ‘…sociologist Jason Moore, who recommended that the new geological epoch be given a name suggestive of the more immediate factors that in his opinion brought it about: capitalocene’ (p. 161). Yet, in collapsing the geological time into human time as it were, we constantly eclipse the geological scale in favour of the human, thus leading us back to the tendency to view the human as the centre of the universe instead of the other way around. In the political realm, this translates to the challenge of evolving a politics structured around the breaking down of distinctions between the human and the natural world, a task that is difficult to do when we do not fully comprehend the vastness and depth in which the geological scale unfolds (p. 195-196).

Thus, for Chakrabarty, the way forward must involve recognizing the ‘alterity’ of the earth, where humans see themselves not as the dominant reason for the planet to exist but rather as a component of the complex multi-cellular life systems that also exist in the planet. Only such  recognition with perhaps an idea of reverence at its core will help in confronting the unique challenges that climate change poses (p. 198-199). While the book does not have a formal conclusion, readers, however, will find a further reiteration of many of the core messages of the book in the postscript, which creatively presents these ideas in a dialogic format, a reproduction of a conversation between the author and the French philosopher, Bruno Latour.

In sum, The Climate of History in a Planetary Age is a breathtaking book. Chakrabarty challenges us to reimagine the human from a planetary perspective, a deep history—an infinite horizon of human history—in order to come to terms with the climate crisis that human actions have precipitated. Simply put, for a long time, the constitution and the well-being of the human, the Anthropos has predominantly been at the heart of our epistemology and action. Chakrabarty suggests that the present crisis of climate change calls for ‘de-centreing’ the human (p. 203).The conceptual and political implications of this paradigm shift for disciplines in the social sciences and humanities are indeed ground-breaking.

Readers will of course arrive at their own conclusion both about the diagnoses of the problem and the various points of inflection that Chakrabarty offers regarding debates around diverse aspects of the Anthropocene. There will be disagreements, of course. But, at its heart, everyone must answer the question that Chakrabarty poses, a particular formulation that in many ways the ancient Greek philosophers would have immediately recognized—does the era of the Anthropocene require us to fundamentally reexamine the way we live? I submit that in this case, it is quite challenging to choose the road not taken.

Arvind Elangovan is a historian of modern South Asia at Wright State University, Dayton, Ohio. Most recently, he is the author of Norms and Politics: Sir Benegal Narsing Rau in the Making of the Indian Constitution, 1935-50 (OUP, Delhi, 2019).