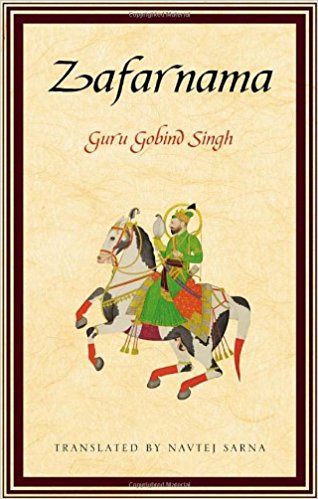 There are documents that survive the strife of history. Who would have known that a missive written by Guru Gobind Singh, the tenth Guru of the Sikhs, to Aurangzeb, the last great Mughal emperor, right after his defeat at the hands of the Mughal army, would survive ironically as Zafarnama, an epistle of victory? Written in exquisite Persian verse, as one can tell from the transcript in this beautifully designed bilingual book by Penguin India, the text stands out as a piece of fine literature, even though it was meant as just another bit of official communication. Navtej Sarna, writer and diplomat, has achieved the ultimate dream of a poetry translator by capturing the lyricism of the original Persian in a language so far removed and diverse as English. He learnt Persian on a sojourn to Tehran, we are told. His extensive introduction to the historic backdrop of events that led to the writing of Zafarnama demystifies the Sikhs for the contemporary readers. The gory traumas, a series of bloody martyrdoms, some almost forced upon the Sikh nation, provide ample clues to the making of this amazing fearless people.

The letter is a chastisement of Aurangzeb, who as a devout Muslim, failed on an oath taken on Quran. The oath was sent to Guru Gobind Singh in writing by the local Mughal commander in order to convince him to vacate his ancestral estate at Anandpur temporarily in order to avoid a feud with the neighbouring Hill Rajas who were incensed by the demolition of caste hierarchy among the Sikhs and feared greater trouble in times to come. Ever since its inception 200 years ago, the Sikh faith has had to fight the brahmanical system, idol worship and superstition on one hand and forcible conversion by the Mughals on the other. Even as the Sikhs had radically departed from the Hindu way of life, they stood up time and again to protect the Hindus from forced conversions at great cost to their Gurus and eminent leaders of the community.