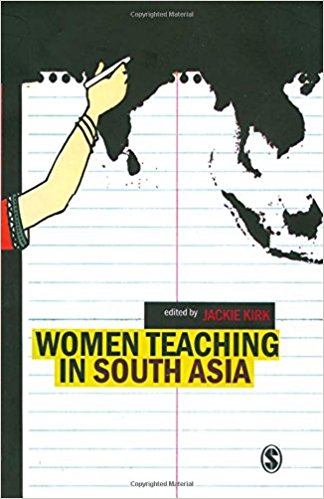 The increasing enrollment of girls in school during the past two decades has been accompanied by a less discussed but not insignificant change in the landscape of schooling in South Asia, i.e. the increased feminization of the teaching profession. While this feminization gains legitimacy within a language of increased girls attendance and women teachers as role-models of empowerment in the community it often serves to mask the blatant low wages, insecurity of tenure and the lack of training that has been historically characteristic of the feminization of most professions globally. As a profession that has historically thrived on the bureaucratization of hierarchy as a sign of efficient control of ‘local’ schools and teachers, and which ironically relies on the ‘care’ and ‘mothering’ that women symbolize, the feminization of the profession has meant a greater naturalization of women’s abilities as care-givers without the necessary professionalization of the field.

The ridiculous extent to which this naturalization of women’s roles as care givers could be harnessed as a scientific and logical policy intervention was made clear by the West Bengal government’s not-so-recent directive of hiring women over forty as the most ideal teachers for younger children. Their rationale was that by this age these mothers would have finished caring for their own young ones and this would make them adequately skilled to take up the care of other children.

Existing writing on women teachers in India largely discusses this shift within the logic of its ‘beneficial’ policy outcomes. In contrast to this, the current volume of essays attempts to critically theorize this shift at both a personal level as well as in terms of what it portends within the largely male educational bureaucracies. The theoretical scaffolding it relies on—namely ‘gender and development’ rather than the prior ‘women in development’ approach—while constitutively more engaged in ‘mainstreaming’ gender issues within development policy unfortunately flags its conclusions too quickly thereby failing to provide an adequate ‘thick description’ of women’s experiences which was the potential promise of this volume. While the comprehensive introduction by Jackie Kirk (who sadly lost her life in Afghanistan in 2008) provides the reader with an adequate understanding of the terms existing debates utilize, the chapters are more disparate in terms of their attentiveness to the experiences of individual teachers versus statistics that capture ‘national’ policy narratives.