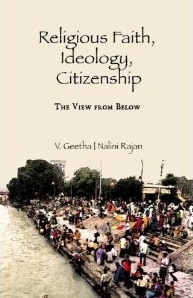 The practice of conceptualizing the political world in binaries is fairly common. While these binaries have been useful for conceptual clarity scholars who are committed to binary conceptualizations such as modernity/tradition, religious belief/secularism, state neutrality/intervention and individual/community sometimes risk ignoring specificities of actual texts or events; they assume that patterns are produced over time fitting into mutually opposed set of ideas. V. Geetha and Nalini Rajan claim to demonstrate that these binary structures are in fact, not fundamentally opposite to one another; rather than being polar opposites these structures in fact constitute each other. The authors of the book record situated histories of the social and political world and find that the very idea of binary opposites loses its clashing character. They write, We believe that a “view from below” as far as secularism is concerned does not fit into neat categories, like the separation of religion and politics or the public and the private. Social and collective change that revolves around faith, whether critically or affirmatively, sets up traffic between the realms of conscience, public action and common good (p. 10).